Rindge is a town in Cheshire County, New Hampshire, United States. The population was 6,476 at the 2020 census, up from 6,014 at the 2010 census. Rindge is home to Franklin Pierce University, the Cathedral of the Pines and part of Annett State Forest.

The land in and around Rindge was originally inhabited by ancestors of the Abenaki tribe of Native Americans. Archeological evidence from nearby Swanzey indicates that the region was inhabited as much as 11,000 years ago (coinciding with the end of the last glacial period). As much as half of the Western Abenakis were victims of a wave of epidemics that coincided with the arrival of Europeans in the late 16th and early 17th centuries. Later, many of the Western Abenaki present in southwestern New Hampshire chose to relocate to Canada during Colonial times, primarily due to their allegiance with the French during the French and Indian Wars.

In the eighteenth century, Massachusetts granted unappropriated land to veterans of Sir William Phipps' 1690 expedition against French-held Canada as compensation for services. Whole townships were granted to certain military companies and became known as "Canada" townships. Granted in 1736 by Governor Jonathan Belcher to soldiers from Rowley, Massachusetts, Rindge was first known as Rowley-Canada. But the Masonian proprietors were making competing claims to the area, and in 1740 commissioners of the Crown decided that the boundary between Massachusetts and New Hampshire lay south of Rowley-Canada. Consequently, it was re-granted in 1749 by Governor Benning Wentworth as Monadnock No. 1, or South Monadnock. The town would be incorporated in 1768 by Governor John Wentworth as Rindge, in honor of Captain Daniel Rindge of Portsmouth, one of the original grant holders, and the one who represented New Hampshire's claim to the land before the king.

Captain Abel Platts is credited as being Rindge's first temporary settler, arriving in 1738 to take possession of his family's land grant. But disputes about the grants, combined with the outbreak in 1744 of King George's War, made it untenable to remain in Rindge, so early settlers abandoned it. Platts and others returned in 1752, and starting in 1758, settlement increased steadily. There were 1,274 residents by 1859, when water powered industries included three gristmills, thirteen sawmills, thirteen shingle mills, six stave mills, two planing mills, and several clapboard mills.

According to the United States Census Bureau, the town has a total area of 40.0 square miles (104 km2), of which 37.2 sq mi (96 km2) is land and 2.8 sq mi (7.3 km2) is water, comprising 6.93% of the town. Rindge is located in a hilly upland lake region. Hubbard Pond is in the northeast, Contoocook Lake on the northern boundary, Pearly Lake is in the northwest, and Lake Monomonac is on the southern boundary. The town is located on a regional watershed divide and is the headwaters for two river systems. The Contoocook River flows north to the Merrimack River, thence to the Gulf of Maine, and the North Branch of the Millers River flows southwest to the Connecticut River, thence to Long Island Sound. Rindge's highest point is on its eastern border, on the lower slopes of Pratt Mountain, where the elevation reaches 1,505 feet (459 m) above sea level.

Rindge is home to the villages of Rindge Center, East Rindge, Converseville, and West Rindge. The town is crossed by U.S. Route 202 and New Hampshire Route 119. 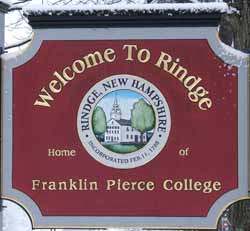 There were 1,805 households, of which 33.1% had children under the age of 18 living with them, 63.0% were married couples living together, 6.0% had a female householder with no husband present, and 27.1% were non-families. 19.3% of all households were made up of individuals, and 6.9% had someone living alone who was 65 years of age or older. The average household size was 2.69 and the average family size was 3.11. 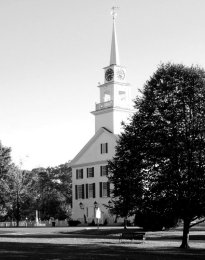 Rindge belongs to the Jaffrey-Rindge Cooperative School District, which has a total of four schools. Rindge is also the home of Franklin Pierce University.

All content from Kiddle encyclopedia articles (including the article images and facts) can be freely used under Attribution-ShareAlike license, unless stated otherwise. Cite this article:
Rindge, New Hampshire Facts for Kids. Kiddle Encyclopedia.