Winchendon is a town in Worcester County, Massachusetts, United States. The population was 10,300 at the 2010 census. The town includes the villages of Waterville and Winchendon Springs (also known as Spring Village). A census-designated place, also named Winchendon, is defined within the town for statistical purposes. The Winchendon State Forest, a 174.5 acres (70.62 hectares) parcel, is located within the township as is Otter River State Forest; both recreational areas are managed by the Massachusetts Department of Conservation and Recreation

Winchendon is a small town in north-central Massachusetts, originally the country of the Pennacook Indians, and then the Nipnet/Nipmuck tribe.

The House of Representatives made the grant of New Ipswich Canada, now Winchendon, on June 10, 1735, in answer to a petition from Lt. Abraham Tilton of Ipswich. The petition was on behalf of veterans or surviving heirs participating in the 1690 expeditions against Canada. Winchendon was officially incorporated in 1764, named after Nether Winchendon, Buckinghamshire, England, which itself was the site of land owned by Governor Francis Bernard, who signed the town's incorporation into law. (The English village would be where the Governor would die, fifteen years later.) The Millers River provided water power for mills, and at one time Winchendon produced so many wooden shingles that it was nicknamed Shingletown.

Morton E. Converse started his business career in Converseville, New Hampshire, manufacturing acids. In 1873, he purchased a nearby mill to make wooden products. Apparently he started making toys there, but soon teamed with Orland Mason of Winchendon to form the Mason & Converse Company, which lasted until 1883. Converse then partnered with his uncle, Alfred C. Converse, and Converse Toy & Woodenware Company was formed. In 1887, the company changed its name to Morton E. Converse & Company. It remained in business until 1934.

The original Giant Rocking Horse was built in 1912 by Morton Converse. The 12-foot (3.7 m) grey hobby horse was named Clyde, and made from nine pine trees. It was a copy of the company’s #12 rocking horse. In 1914, Clyde entered the local parade to celebrate the town’s 150th anniversary. Clyde was moved to the railroad station for about 20 years. Then in 1934, he moved to the edge of the Toy Town Tavern for about 30 years. After that, he was put in storage and fell into disrepair. A replica, Clyde II, was sculpted in 1988 using the original as a model. He is now on display in a covered pavilion. 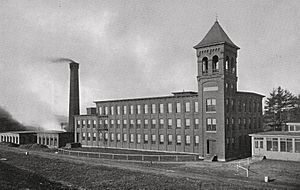 A second mill in Winchendon Springs on Glenallan Street was operational from 1886 until closing in 1929, during the economic decline of the Great Depression 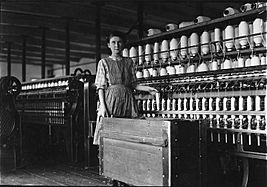 In addition to the manufacturing of wood products, Winchendon is known for its textile business during the Industrial Revolution. Located at the headwaters of the Millers River, Joseph ‘Deacon’ White of West Boylston, Massachusetts, with his son Nelson, purchased a textile mill in Spring Village in 1843. By 1857, the Nelson Mills had revamped a previous facility. In 1870, Joseph N. White, son of Nelson, traveled to Canada to recruit additional workers from Quebec. Spring Village became a prototype ‘company town’ with jobs, housing and a school for its workers. A second mill was built in 1887 and was known as the Glenallan Mill. The business thrived during the last half of the 19th and first half of the 20th centuries. As the south was modernized during the 1930s, textile operations in New England migrated south. In 1911, Lewis Hine, a noted photographer employed by the US Government, visited the Nelson Mills in Spring Village and documented the presence of child laborers, particularly teenage girls who were employed at reloading spindles of cotton thread for the looms. Both World War II and the Korean War demands for denim were instrumental in keeping White Brothers, Inc. in business; the organization ceased operations in 1956 due to economic pressures from industrialization of the south.

According to the United States Census Bureau, the town has a total area of 44.1 square miles (114 km2), of which 43.3 square miles (112 km2) is land and 0.8 square miles (2.1 km2), or 1.77%, is water. Winchendon is drained by the Millers River. Winchendon is home to the Lake Dennison Recreation Area and Whitney Pond, and shares Lake Monomonac with Rindge, New Hampshire to the north. Along the path of the Millers River, in the western part of town, much of the land is marshy, with several brooks feeding into both the Millers River and the nearby Otter River, which flows into the Millers River in the southwest corner of town. The town lies on relatively flat high ground, with the western slope of Town Line Hill (1,320 ft) being the highest point in town, near the southeast corner of town. Two protected areas, the Birch Hill Wildlife Management Area and the Otter River State Forest, both have part of their lands within the town, as well as the small Winchendon State Forest.

Winchendon is the middle town of the three Worcester County towns bordering New Hampshire's Cheshire County. It is bounded by Fitzwilliam and Rindge to the north, Ashburnham to the east, Gardner to the southeast, Templeton to the southwest, and Royalston to the west. From its town center, Winchendon is 16 miles (26 km) northwest of Fitchburg, 20 miles (32 km) southeast of Keene, New Hampshire, 35 miles (56 km) north-northwest of Worcester and 60 miles (97 km) northwest of Boston. 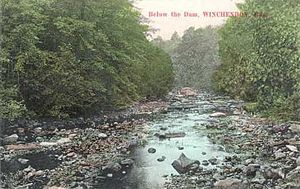 Winchendon has no interstate or limited access highways within town; the nearest is Route 2, the major east-west route through the northern part of the state, in Templeton and Gardner. U.S. Route 202 passes through the town before heading into New Hampshire. Route 12 also passes through the town, from Ashburnham towards Fitzwilliam and Keene. The northern terminus of Route 140 is also within town, at its intersection with Route 12. This intersection was improved around the turn of the 21st century to include stoplights, in order to make it safer (as it had been a common site for accidents within town). When Route 140 was rerouted to bypass the Town of Gardner in the 1970s, Winchendon's status as a bedroom community was facilitated by easy access to Route 2 and points east toward Greater Boston, I-495 and I-95.

The Boston & Albany Railroad had an important junction in town; the former station was location on Center and Railroad Streets. Freight service ended in the 1980s when successor Guilford Rail System abandoned the line, which followed Route 12 for much of its route.

A line of the Montachusett Regional Transit Authority (MRTA) links the town with Gardner (and, in the mornings, directly with Fitchburg). There is no air service within town; the nearest small airport is Gardner Municipal Airport in Templeton, and the nearest national air service is located at Manchester-Boston Regional Airport in New Hampshire.

There were 3,447 households out of which 39.4% had children under the age of 18 living with them, 56.3% were married couples living together, 11.2% had a female householder with no husband present, and 28.1% were non-families. 22.3% of all households were made up of individuals and 9.8% had someone living alone who was 65 years of age or older. The average household size was 2.75 and the average family size was 3.23.

The Winchendon public library began in 1867. In 1907 the library trustees approached philanthropist, Andrew Carnegie to fund a new facility; when Carnegie declined to increase his funding from $12,500 to $25,000, Charles L. Beals, a local businessman, presented the Selectman of Winchendon a check for $25,000 to fund a new library. In fiscal year 2008, the town of Winchendon spent 0.62% ($149,399) of its budget on its public library—some $14 per person.

All content from Kiddle encyclopedia articles (including the article images and facts) can be freely used under Attribution-ShareAlike license, unless stated otherwise. Cite this article:
Winchendon, Massachusetts Facts for Kids. Kiddle Encyclopedia.