Fitchburg is the third largest city in Worcester County, Massachusetts, United States. The population was 40,318 at the 2010 census. Fitchburg is home to Fitchburg State University as well as 17 public and private elementary and high schools.

Fitchburg was first settled in 1730 as part of Lunenburg, and was officially set apart from that township and incorporated in 1764. It is named for John Fitch, one of the committee that procured the act of incorporation. In July 1748 Fitch and his family, living in this isolated spot, were abducted to Canada by Native Americans, but returned the next year.

Fitchburg is situated on both the Nashua River and a railroad line. The original Fitchburg Railroad ran through the Hoosac Tunnel, linking Boston and Albany, New York. The tunnel was built using the Burleigh Rock Drill, designed and built in Fitchburg. Fitchburg was a 19th-century industrial center. Originally operated by water power, large mills produced machines, tools, clothing, paper, and firearms. The city is noted for its architecture, particularly in the Victorian style, built at the height of its mill town prosperity. A few examples of these 19th century buildings are the Fay Club, the old North Worcester County Courthouse and the Bullock house.

As the city is one of two shire towns, the Northern Worcester County Registry of Deeds, established in 1903, and the county jail on Water Street were two county facilities located in Fitchburg.

The 1961 film Return to Peyton Place was filmed in Fitchburg.

Fitchburg is divided into multiple different neighborhoods/villages, including:

North Central Massachusetts' most treasured cultural institution is a world-class family-friendly museum with a permanent collection spanning 5,000 years. The museum was founded in 1925 through the bequest of artist, collector and Fitchburg native Eleanor Norcross (1854–1923). Her extraordinary talents and educational vision highlights her as an important pioneer in American social history. The museum's four building complex features over 20,000 square feet of gallery and educational workshop space and includes the historic "Cross Barn" built in 1883, and the impressive Simond's building completed in 1989. Visitors can experience masterpieces in 12 beautifully designed galleries that feature American, European, African, Egyptian, Greek, Roman, Asian, and Pre-Columbian art. 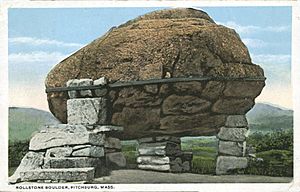 Fitchburg is noted for the "Rollstone Boulder", a 110-ton specimen of porphyritic granite, which is in a small triangular park adjacent to the city green. The boulder was a feature of the summit of Rollstone Hill; it was exploded and reassembled on the green in 1929 and 1930. A plaque attached to the boulder today reads, in part:

This boulder, carried by the last glacier from Mt. Monadnock, New Hampshire to the summit of the hill whose name commemorates it, was for centuries a land mark to Indian and Settler. Threatened with destruction by quarrying operations, it was saved by popular subscription...

Listed on the National Register of Historic Places, this athletic facility was a gift of Alva Crocker, in 1918, to the City Of Fitchburg’s school children. Alvah Crocker hired the famous Olmsted Brothers Landscaping and Design Firm of Brookline, MA to design his “field of dreams.” Babe Ruth once visited Crocker field and asked Clarence Amiott, then the Fitchburg High School Athletic Director, “What professional team plays here?” to which Mr. Amiott answered “The Fitchburg High School teams.” Crocker Field website

This is the first—and only—toy museum in the world that’s completely devoted to aviation-related toys. Included in the museum’s collection of over 2000 toys are tin toys from Japan, Hungary, Germany, and the United States. Top Fun Aviation Museum.

The Society houses more than 200,000 items related to the history of Fitchburg. Included in the archives are original Sentinel newspapers from 1838 to 1976, city directories, photographs, scrapbooks, manuscripts, family genealogies, postcards, files on industries in the City, and books and pamphlets on Fitchburg’s history from the 1700s to the present. In addition there is an extensive Civil War collection and a collection on the railroad. The Research Library is open to the public. The Society also has a remarkable collection of artifacts which tell the story of Fitchburg—early iron hearth cooking tools, the first printing press of the Fitchburg Sentinel, machines illustrating the strong industrial heritage of the City, a stellar collection of early paintings, and clothing representing many decades in Fitchburg. A comprehensive strategic plan completed in 2001 pointed out a need to find a building better suited our needs in order to continue collecting and preserving the history of Fitchburg and conducting programs for students and the general public. The Historical Society is now in the final stages of renovation and upgrading our building located at 781 Main Street. As a result of the renovations to the H. M. Francis Phoenix Building the Society has moved to its new location of 781 Main Street, Fitchburg, MA.

Coggshall Park is a Victorian park with miles of wooded trails branching out from around Mirror Lake, which is encircled by a walking path. Stone steps built into a hillside face a gazebo on the water, making this a popular spot for weddings and photos. A classic stone house on the property overlooks Mirror Lake. The tables and benches scattered around the park draw picnickers as well as those simply seeking a place to relax. For the children there's a playground that sits adjacent from the pond and a frisbee golf course.

Coggshall Park was a gift to the City from Mr. Henry Coggshall, an executive of The Fitchburg Gas Company, and his wife in 1894. The initial donation included 86 acres (35 ha), but the couple subsequently purchased and donated additional parcels to create the 212-acre park that exists today. Coggshall Park also abuts a large parcel of conservation land and a bird sanctuary, providing a total of approximately 300 acres (120 ha) for visitors to enjoy.

The Friends of Coggshall Park was founded in 1992 when approximately $1 million in state and federal funds were used to renovate the park. Since the group's founding, the Friends have contributed significantly to the upkeep and beautification of Coggshall Park. Annual spring clean-up projects, to which the Friends contribute both volunteer labor and supplies (including more than 60 yards of mulch each year), ensure the park's landscaping remains well-kept. Other investments made by the Friends have been even more significant, such as the purchase of a new fountain for Mirror Lake and a specialized off-road firefighting vehicle for use in Coggshall or elsewhere around the city as needed.Friends of Coggshall Park 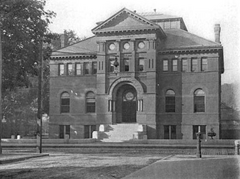 In 1885 Rodney Wallace builds and furnishes the Wallace Library and Art Gallery at the corner of Main Street and Newton Place as a gift to the people of Fitchburg. Then in 1899 library service for children begins in one of the first Children's rooms in the country. It wasn't unit 1950 that a new separate Fitchburg Youth Library was opened. Service of the library was increased with the purchase of a bookmobile which extended service to outlying areas of the city.

The existing Wallace Library is dedicated in 1967. Named for George R. Wallace, Jr. and his wife Alice G. Wallace, who gave a magnificent gift for the library building. The federal Library Services and Construction Act and money from the City of Fitchburg also funded the project. And Helen E. Vickery Fund provided for a new bookmobile.

Furthermore, on going support comes from the Friends of the Fitchburg Public Library. The Friends of FPL establish closer relations between the library and the people it serves, promotes support of services, and funds several important services such purchasing books for the library and the fees for the museum passes. The Friends work with area museums to bring you Museum Passes you can use to visit exhibits for reduced fees.

In 2014 the Fitchburg Law Library opened at the Fitchburg Public Library in response to the closure of the office on Elm Street in Fitchburg. The new library location is fully accessible and open to the public.

Transportation for Fitchburg is largely supplied by the Montachusett Regional Transit Authority (MART). MART operates fixed-route bus services, shuttle services, as well as paratransit services within the Montachusett Region. It also provides connections to the MBTA Commuter Rail line at Fitchburg Station. The Fitchburg Station is the last stop on the Fitchburg Line from the North Station in Boston. MAX provides intercity bus service to Worcester and Brattleboro, Vermont with intermediate stops.

The Fitchburg Municipal Airport occupies 335 acres (136 ha) off Airport Road in Fitchburg near the Leominster border. In 1940, the airport land was donated to the City of Fitchburg and serves the greater Fitchburg area. 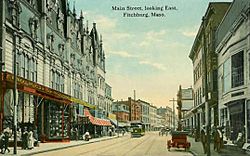 Throughout the early twentieth century, Fitchburg was known for its paper industry, which occupied the banks of the Nashua River and employed a large segment of the European immigrant population. It has been noted by many residents in Fitchburg that the Nashua River would be dyed the color the paper mills had been coloring the paper that day. 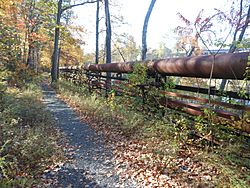 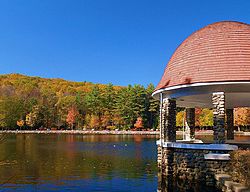 The Fitchburg Parks and Recreation Department maintains parks in Fitchburg, which include:

Flat Rock Wild Life Sanctuary, a 326-acre wild life sanctuary that is part a network of Mass Aududon land, with 6 miles of trails. It is located within minutes from downtown Fitchburg, the hustling sounds of the city fade into a chorus of songbirds, rustling leaves, and zipping dragonflies. This wooded area provides habitat for species needing relatively large territories such as fisher, coyote, and red fox. Bobcat and black bear occasionally travel through these woods over rocky ledges and through hemlock groves.

The West Fitchburg Steam Line Trail is a bike and walking path located in Fitchburg on Route 2A. It is 0.6 miles long and runs along the Nashua River and Flag Brook in the Waites Corner neighborhood. The path is gravel and is relatively easy terrain. The trail is the first contracted part of a planned project to build a mixed use bike and walking trail through Fitchburg. This trail will eventually connect with trails in the neighboring towns of Leominster and Westminster. Additional parts of the proposed trail are in the Riverfront and Gateway Parks.

The Fitchburg Steam Line Trail is located near the junction of Route 31 (Princeton Rd) and Route 2A (Westminster St) at 465 Westminster Street. The trail parking lot is marked with signs, and is on the south side of 2A approximately ¼ mile East of Route 31.

The trail starts to the left of the Fitchburg Central Steam Plant.

In the fictional Harry Potter universe, Fitchburg is the hometown of the professional Quidditch team the Fitchburg Finches.

The McConnell Story, starring Alan Ladd has its opening in Fitchburg, and many scenes of June Allyson's character's family are in Fitchburg, as the movie progresses.

The band Nirvana played a concert at the Wallace Civic Center in Fitchburg on November 11, 1993. Before the concert, frontman Kurt Cobain bought a guitar at Salvatore Bros Great Music Box at 480 Main Street (now closed) which he famously played on the band's recording of MTV Unplugged In New York on November 18, 1993.

In the Fringe episode "The Human Kind", Olivia goes to Fitchburg to retrieve an electromagnet.

In 2012, Dark Horse Comics began releasing an eight-issue limited comic book series entitled Falling Skies: The Battle of Fitchburg, with Paul Tobin writing and Juan Ferreyra as artist. The story takes place chronologically between seasons one and two of the Falling Skies television show, and details a costly engagement occurring between the skitters and the 2nd Massachusetts Militia Regiment when the aliens surround the human forces at Fitchburg, Massachusetts.

All content from Kiddle encyclopedia articles (including the article images and facts) can be freely used under Attribution-ShareAlike license, unless stated otherwise. Cite this article:
Fitchburg, Massachusetts Facts for Kids. Kiddle Encyclopedia.