New Ipswich is a town in Hillsborough County, New Hampshire, United States. The population was 5,204 at the 2020 census. New Ipswich, situated on the Massachusetts border, includes the villages of Bank, Davis, Gibson Four Corners, Highbridge, New Ipswich Center, Smithville, and Wilder, though these village designations no longer hold the importance they did in the past. The Wapack Trail passes through the community. 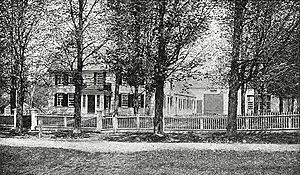 New Ipswich was granted in 1735 to 60 inhabitants of Ipswich, Massachusetts, from whence the name is derived, by Colonial Governor Jonathan Belcher and the General Court (Assembly) of Massachusetts. As was customary, tall white pine trees were reserved for use as masts by the Royal Navy. Settlement began in 1738, when Abijah Foster arrived with his wife and infant daughter. In 1762, Governor Benning Wentworth incorporated the town as "Ipswich", and then in 1766 as "New Ipswich". New Ipswich Academy, later renamed Appleton Academy after benefactor Samuel Appleton, was chartered in 1789, the second oldest in New Hampshire after Phillips Exeter Academy in Exeter. It would also serve as high school for the nearby communities of Mason and Greenville. Appleton Academy closed in 1968. In 1969, construction of Mascenic Regional High School was completed in New Ipswich. 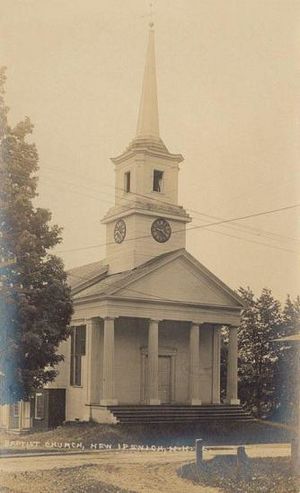 The Souhegan River provided water power for mills, and in 1801, the first woolen mill in the state was established at New Ipswich, followed in 1804 by the first cotton mill. Other early factories produced glass, potash and linseed oil. Cabinet making craftsmen produced elegant furniture. The town's affluence would be expressed in fine architecture, an example of which is the Barrett House, used as a setting for the 1979 Merchant Ivory film of The Europeans by Henry James. Bypassed by the railroad, the early mill town was preserved.

In the past half century, a notable influx of peoples of Finnish descent, particularly of the Apostolic Lutheran Church of America, have settled in New Ipswich. Additionally, migrants from nearby Massachusetts make up a large percentage of new residents.

According to the United States Census Bureau, the town has a total area of 33.1 square miles (86 km2), of which 32.8 sq mi (85 km2) is land and 0.3 sq mi (0.78 km2) is water, comprising 0.97% of the town. New Ipswich is drained by the Souhegan River. New Ipswich Mountain, part of the Wapack Range, is the highest point in the town, with an elevation of 1,881 feet (573 m) above sea level. Much of the town is made up of the wooded foothills of the Wapack Range. Secondary growth forests have reclaimed the vast majority of the pasture lands that dominated New Ipswich and much of New England at the beginning of the 20th century.

New Ipswich is bordered by Rindge to the west, Sharon and Temple to the north, Greenville and Mason to the east, and Ashburnham, Massachusetts and Ashby, Massachusetts to the south. 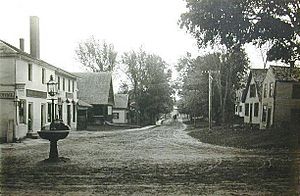 There were 1,350 households, out of which 45.6% had children under the age of 18 living with them, 69.6% were married couples living together, 7.2% had a female householder with no husband present, and 19.3% were non-families. 15.2% of all households were made up of individuals, and 5.6% had someone living alone who was 65 years of age or older. The average household size was 3.16 and the average family size was 3.55. 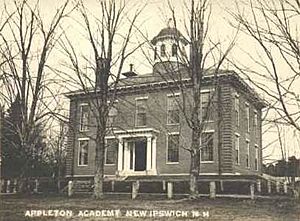 New Ipswich has one of the highest population percentages of residents under the age of 18 in New Hampshire.

All content from Kiddle encyclopedia articles (including the article images and facts) can be freely used under Attribution-ShareAlike license, unless stated otherwise. Cite this article:
New Ipswich, New Hampshire Facts for Kids. Kiddle Encyclopedia.