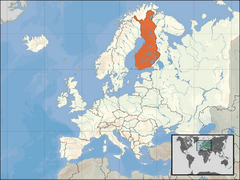 Finland on a map of Europe

Finland (Suomi in Finnish) is a country in Northern Europe and is a member state of the European Union. Finland is one of the Nordic countries. It is also part of Fennoscandia. Finland is between the 60th and 70th latitudes North. Its neighbours are Sweden to the west, Norway to the north, Russia to the east and Estonia to the south, beyond the sea called Gulf of Finland. Most of western and southern coast is on the shore of the Baltic Sea.

The capital of Finland is Helsinki. The currency of Finland is the euro (EUR); before 2002 it was the markka, the Finnish mark (FIM). The president of Finland is Sauli Niinistö. 5.3 million people live in Finland. Finnish and Swedish are the official languages of Finland. Most people in Finland speak Finnish, but about six percent of Finland's people speak Swedish as their mother tongue, living mostly in the western part of Finland and on Åland (Finnish Ahvenanmaa). Finland became independent of Russia in 1917.

The most important cities and towns in Finland are Helsinki, Espoo, Tampere, Vantaa, Turku, Oulu, Lahti, Kuopio, Jyväskylä and Pori.

Finland is a highly industrialized First World country. The most important Finnish industrial products are paper, steel products such as machines, and electronics.

Nokia (the mobile company) is originally a company of Finland, named after a small town called Nokia.

Finland has been top of the list of least corrupt countries on the Corruption Perceptions Index more times than any other country.

The people of Finland are called Finns. Most Finns speak Finnish as their mother tongue; 6% of Finns have the Swedish language as their mother tongue. Finns also study mandatory English and Swedish in school. Most Finns work either in services (that is: shops, banks, offices or businesses) or in factories. Finns often like saunas and nature. Many Finnish families have summer cottages, small houses where they go to relax on their summer holidays. The most important festivals that Finnish people celebrate are Midsummer and Christmas. Santa Claus is an old Finnish tradition, although later the Coca-Cola company introduced him to the world.

The most popular sports in Finland are ice hockey, skiing, track and field and association football (soccer). Recently Finns have also won many events in swimming, motor sports and gymnastics.

There is a very small group (a minority) of a few thousand Samis (also called Lapps) in the most northern part of Finland, called Lapland. Most of the Samis live in Norway and Sweden. Many Sami people farm reindeers. Originally Samis were hunter-gatherers. In the past the Sami were nomads, but nowadays they live in regular houses.

Very few people in Finland, approximately 2%, are from other countries, The number of foreigners in Finland has recently been growing rapidly. 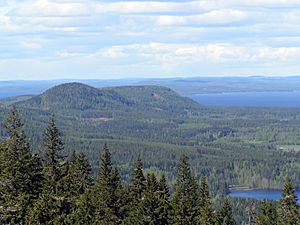 This picture is from Koli, North Karelia

Most of Finland is covered by pine forest. The swan, which was considered holy long ago, is the national bird of Finland. Wood is the most important natural resource of Finland. It is estimated that up to one-third of all wood resources of the European Union are in Finland.

The national animal of Finland is the brown bear. The largest animal is the elk, a type of moose, which is a member of the deer family.

There are hundreds of rivers and thousands of fresh water lakes. Fishing is a popular sport. It is estimated there are almost 180,000 lakes in Finland.

Many islands in the Baltic Sea belong to Finland, too. Thousands of islands are part of the Åland archipelago. Tourists from all over the world come to see the fells and the northern lights in Lapland.

The weather in Finland varies widely by season. Summer usually lasts from May to early September, and temperatures can reach up to +35 °C. Autumns are dark and rainy. Winter snow usually begins to fall in Helsinki in early December (in Lapland it can fall as early as October) and in the winter the temperature can drop to -30 °C. Winter usually lasts to mid-March, when the snow melts in Helsinki (in Lapland the snow usually doesn't melt until early May), and Spring lasts till late May. Spring can be erratic, and the weather can change from frost to sunshine wthin a matter of days. The famed Northern Lights are common in Lapland.

People first came to Finland 10,000 years ago. That was just after an ice age, after a glacier that covered the ground had receded.

Some think the first people in Finland already spoke a language that is related to Finnish that is spoken today. It is known for sure that an early form of the Finnish language was spoken in Finland in the Iron Age. (The Iron Age in Finland was 2,500–800 years ago).

The first residents in Finland hunted animals, as "hunter-gatherers". Some people started to farm crops about 5,200 years ago. Farming slowly became more and more popular and became the major way of life until the modern age.

The ancient Finns were pagans, like most Europeans, as well as most people everywhere. The most important god of the Finnish pantheon was Ukko. He was a god of sky and thunder, much like Odin, another Scandinavian god-king. These powers were common among the pagan god kings in pantheons ranging from the Finnish Ukko, to the Scandinavian/Germanic/Saxon Odin, all the way east to Zeus of the Greeks and Jupiter of the Romans.

Around a thousand years ago when most of Europe were adopting Christianity, eventually Finland followed suit. During the Reformation of Christianity in the 16th century, most Finns became Protestants. Some pagan practices still remain amongst the now Christian Finns, such as bear worship.

From the Middle Ages Finland was a part of Sweden. Then, in the year 1809, Russia took Finland from Sweden. Finland was a part of Russia, but after a short period of time it became autonomous, which means that the Finns essentially controlled Finland, though the Tsar was in control officially. Finns could create their own laws and had their own currency, (called the markka), their own stamps and own customs. However, Finland did not have its own army. 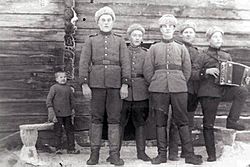 Finnish soldiers at the time of war

Adolf Hitler was the dictator of Germany, and wanted to invade the Soviet Union. Finland wanted to retrieve the areas that it had lost, so they joined the German invasion, which started in 1941. This part of the Second World War is called the Continuation War in Finland. However, Finland was not a fascist or an antisemitic country. Finns were interested in freedom rather than dictatorship.

While Germany was losing the war, Finland had already progressed into the Soviet Union in order to regain the areas lost in the previous peace. Finland wanted to end the war with the Soviet Union, which resulted in peace, but once again Finland had to relinquish the areas that they had conquered. This time, the peace with the Soviet Union made Finland and Germany enemies. Finns fought Germans, and Germans retreated to Norway, burning down all of Lapland behind them. This is called War of Lapland. Finland remained independent.

After the war, many factories were built in Finland. Many people moved from farms to cities. At that time, big factories manufactured products like paper and steel. More and more people worked in more advanced jobs, like high technology. Also, many people went to universities to get a good education. Finland was one of the first countries where most people had Internet connections and mobile phones. A well-known company that makes mobile phones, Nokia, is from Finland.

Finland has a mixed economy. Free market controls a lot of production and sales of goods, but public sector is involved in services. In 2013, taxes were 44% of gross national product. This is 4th largest in Europe, after Denmark, France and Belgium.

Elections are organized to select 200 members to the Parliament of Finland. Also selected are the president of Finland, members of town and city councils and Finnish members to the European Parliament. The elections are secret and direct. People vote directly for the person they want to be elected. In presidential elections votes are only cast for a person, not for a political party. All the other elections are proportional. The system is a combination of voting for individuals and parties. The right to vote is universal and equal. In general elections everybody has one vote.

All content from Kiddle encyclopedia articles (including the article images and facts) can be freely used under Attribution-ShareAlike license, unless stated otherwise. Cite this article:
Finland Facts for Kids. Kiddle Encyclopedia.