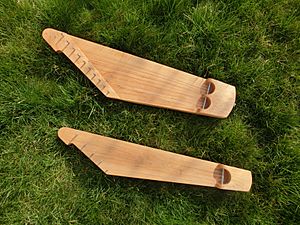 A kantele is a traditional Finnish and Karelian plucked string instrument (chordophone).

It belongs to the south east Baltic music instrument family known as the Baltic psaltery along with Estonian kannel, Latvian kokles, Lithuanian kanklės and Russian gusli. 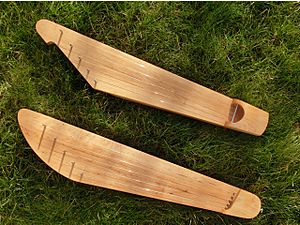 Two five string kanteles by Melodia Soitin (2014). Shape of the upper kantele is more traditional, while the one for kantele below is slightly modernised

Modern instruments with 15 or fewer strings are generally more closely modeled on traditional shapes, and form a category of instrument known as small kantele, in contrast to the modern concert kantele.

The oldest forms of kantele have five or six horsehair strings and a wooden body carved from one piece; more modern instruments have metal strings and often a body made from several pieces. The traditional kantele has neither bridge nor nut, the strings run directly from the tuning pegs to a metal bar (varras) set into wooden brackets (ponsi). Though not acoustically efficient, this construction is part of the distinctive sound of the instrument.

A modern concert kantele can have up to 40 strings. The playing positions of the concert kantele and the small kantele are reversed: for a small kantele, the longest, low-pitched strings are farthest away from the musician's body, whilst for a concert kantele this side of the instrument is nearest, and the short, high-pitched strings are the farthest away. Concert versions have a switch mechanism (similar to semitone levers on a modern folk harp) for making sharps and flats, an innovation introduced by Paul Salminen in the 1920s. 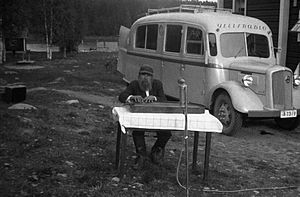 A man plays a kantele with his fingers in 1930s Finland

The kantele has a distinctive bell-like sound. The Finnish kantele generally has a diatonic tuning, though small kanteles with between 5 and 15 strings are often tuned to a gapped mode, missing a seventh and with the lowest pitched strings tuned to a fourth below the tonic, as a drone. Players hold the kantele in their laps or on a small table. There are two main playing techniques, either plucking the strings with the fingers or strumming unstopped strings (sometimes with a matchstick). Small kanteles and concert kanteles have different, though related, repertoires. 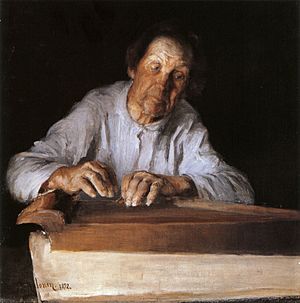 "The Kantele Player" by Pekka Halonen

There have been strong developments for the kantele in Finland since the mid-20th century, starting with the efforts of modern players such as Martti Pokela in the 1950s and 1960s. Education for playing the instrument starts in schools and music institutes up to conservatories and the Sibelius Academy, the only music university in Finland and the site of significant doctoral research into traditional, western classical and electronic music. A Finnish luthiery, Koistinen Kantele, has also developed an electric kantele, employing pickups similar to those on electric guitars, which has gained popularity amongst Finnish heavy metal musicians such as Amorphis. 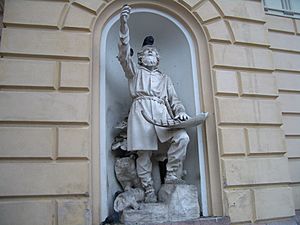 Robert Stigell's 1888 sculpture at Vanha Ylioppilastalo (Old Student House) in Helsinki depicts Väinämöinen with the first kantele, made of a giant pike's jawbone, as told in the Kalevala national epic.

In Finland's national epic, Kalevala, the mage Väinämöinen makes the first kantele from the jawbone of a giant pike and a few hairs from Hiisi's stallion. The music it makes draws all the forest creatures near to wonder at its beauty.

Later, after grieving at the loss of his kantele, Väinämöinen makes another one from birch, strung with the hair of a willing maiden, and its magic proves equally profound. It is the gift the eternal mage leaves behind when he departs Kaleva at the advent of Christianity.

All content from Kiddle encyclopedia articles (including the article images and facts) can be freely used under Attribution-ShareAlike license, unless stated otherwise. Cite this article:
Kantele Facts for Kids. Kiddle Encyclopedia.