Cloud County (county code CD) is a county located in the U.S. state of Kansas. As of the 2020 census, the county population was 9,032. Its county seat and most populous city is Concordia. 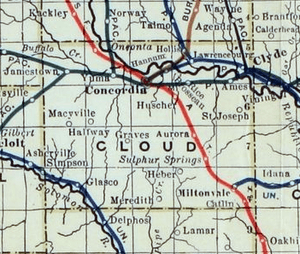 Cloud county was originally named "Shirley" county. It was then renamed "Cloud" county in honor of Colonel William F. Cloud.

Cloud County was formed from the existing Washington County, Kansas in a joint convention with Republic and Cloud counties. The county was legally organized on September 6, 1866 with Elk Creek designated as the temporary county seat. 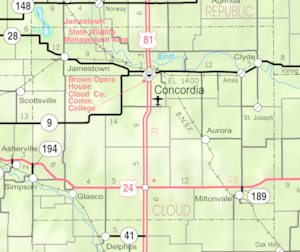 Cloud County is bisected from north to south by U.S. Route 81, which runs through the town of Concordia and connects north to Belleville, Kansas or south to Salina, Kansas. The southern part of the county also has U.S. Route 24, connecting Clay Center, Kansas from the east and Beloit, Kansas to the west. 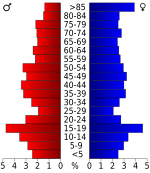 Cloud County is divided into eighteen townships. The city of Concordia is considered governmentally independent and is excluded from the census figures for the townships. In the following table, the population center is the largest city (or cities) included in that township's population total, if it is of a significant size.

Cloud County has also been listed as one of the locations for Smallville in the Superman story line. 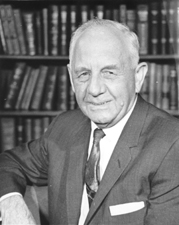 Frank Carlson was the 30th Governor of Kansas. He called Concordia his home, and the Frank Carlson Library is named in his honor.

Charles H. Blosser was an aviator who was awarded the Kansas Governor's Aviation Honors Award and was inducted into the Kansas Aviation Hall of Fame in 1990. At one time, he was the oldest living licensed pilot in the United States.

Napoleon Bonaparte Brown was a soldier, businessman, politician, and resident of Kansas and Missouri in the late 19th and early 20th centuries. He is most known as the namesake and builder of the Brown Grand Theatre in Concordia, Kansas, a majestic opera house completed in 1907 and listed on the National Register of Historic Places. The theater has been called "the most elegant theater between Kansas City and Denver."

Larry Hartshorn was a former NFL Offensive Guard who played for the Chicago Cardinals in 1955 and 1957. He later played in the Canadian Football League with the Calgary Stampeders in 1958. After his years in professional football, Hartshorn moved to Concordia to become a teacher and coach for 33 years at Concordia Junior-Senior High School, where he coached Keith Christensen. Hartshorn began the wrestling program in 1966, running it as head coach from 1966 to 1974. He continued to serve in various coaching and education capacities until his retirement.

Ernest C. Quigley was a basketball referee and as an umpire in Major League Baseball. He also worked as an American football coach and official. Quigley was raised in Concordia, Kansas where he was a prominent member of the high school football team in the 1890s. In 1944 he became the athletic director at the University of Kansas.

All content from Kiddle encyclopedia articles (including the article images and facts) can be freely used under Attribution-ShareAlike license, unless stated otherwise. Cite this article:
Cloud County, Kansas Facts for Kids. Kiddle Encyclopedia.