Jamestown is a city in Cloud County, Kansas, United States. As of the 2010 census, the city population was 286.

Jamestown was founded in 1878, and was incorporated as a city in 1883. It was named for either Senator James Pomeroy, or James P. Pomeroy, a railroad official. A post office was opened in Alva (an extinct town) in 1871, but it was moved to Jamestown in 1878. The town located itself on the Missouri Pacific Railroad.

In 1911 the entire downtown business district was destroyed by a fire. Few records remain of that fire, but the townspeople subsequently rebuilt the downtown commercial district.

History repeated itself on January 28, 2000 when another fire consumed several buildings on Main Street and spread to the city hall. And again, history repeated itself as the town rebuilt. Mayor Judy Hill stated, "A fire like that can destroy a small town, but instead it ignited a community spirit here." In a few days, Jamestown was having town meetings to make plans for the future.

The funeral home in Jamestown was selected as the temporary city office and meeting place. More than 50 people (out of a population of 307 at the time) came to town meetings there and the citizens organized into several committees to begin work.

Today, Jamestown has a new community center with daycare facilities and a thriving downtown activities center with a health clinic, public library, and several businesses.

There were 126 households, of which 27.8% had children under the age of 18 living with them, 46.8% were married couples living together, 11.9% had a female householder with no husband present, 7.9% had a male householder with no wife present, and 33.3% were non-families. 29.4% of all households were made up of individuals, and 11.1% had someone living alone who was 65 years of age or older. The average household size was 2.27 and the average family size was 2.71. 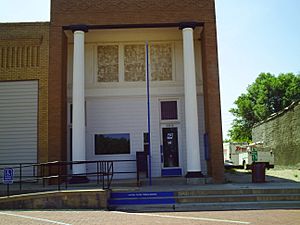 Jamestown is mostly a small agricultural community. There is a local bank that services accounts through the area. Through local efforts and federal funding, a community center, activities center, and public library have been added to the downtown area. A large number of residents complete their shopping in nearby Concordia, Kansas.

A weekly newspaper called the Jamestown Settler was published from 1977 until 1983. Other papers were published from time to time, including The Kansas Optimist from 1904 until 1965 and The Quill from 1888–1890.

The community is served by Concordia USD 333 public school district.

In 1911, local residents of Jamestown transferred some property to School District 32 to create the Jamestown Schools. Kansas public schools underwent reorganization and in 1962, the "old" school district 32 entered a Quit Claim Deed and transferred the property to Unified School District 333. The Jamestown School provided classes for grades 1-12 in one building and also maintained a second building for industrial arts classes. The school also kept a playground and athletic field.

Records from October 1984 show a Resolution to Transfer the property from USD 333 back to the City of Jamestown. The main building has been demolished and only the gym stands today.

Jamestown High School athletic teams were known as the Jamestown Jayhawks and competed in the Pike Trail League, primarily made up of small local schools in the area. Students participated in 8-man football, volleyball, basketball, and track & field.

All content from Kiddle encyclopedia articles (including the article images and facts) can be freely used under Attribution-ShareAlike license, unless stated otherwise. Cite this article:
Jamestown, Kansas Facts for Kids. Kiddle Encyclopedia.