Kids Encyclopedia Facts
This page is about the region of Texas. For the university in Denton, see University of North Texas.

North Texas (also commonly called North Central Texas, Northeastern Texas, and Nortex) is a term used primarily by residents of Dallas, Fort Worth, and surrounding areas to describe much of the northern portion of the U.S. state of Texas. Residents of the Dallas–Fort Worth Metroplex generally consider North Texas to include the area south of Oklahoma, east of Abilene, west of Paris, and north of Waco. A more precise term for this region would be the northern part of the central portion of Texas. It does not include the Panhandle of Texas, which expands further north than the region previously described, nor does it include most of the region near the northern border of Texas.

North Texas is centered upon the Dallas–Fort Worth Metroplex, the largest metropolitan area in Texas. People in the Dallas and Fort Worth areas sometimes use the terms "Metroplex", "DFW", and "North Texas" interchangeably. However, North Texas refers to a much larger area that includes many rural counties.

The North Texas climate is subtropical with hot summers. It is also continental, characterized by a wide annual temperature range. Average annual precipitation also varies considerably, ranging from less than 28 to more than 48 inches (700–1200 mm). Severe storms are frequent in the spring, as the area lies in the southern section of "tornado alley".

Winters are mild, but northers occur about three times each month, and often are accompanied by sudden drops in temperature. In Dallas, a record-setting 12.8 inches of snow fell in February 2011. Periods of extreme cold that occasionally occur are short-lived, so that even in January mild weather occurs frequently.

The highest temperatures of summer are associated with fair skies, westerly winds and low humidities. Characteristically, hot spells in summer are broken into three- to five-day periods by thunderstorm activity. There are only a few nights each summer when the low temperature exceeds 80 °F (27 °C). Summer daytime temperatures frequently exceed 100 °F (38 °C). Air conditioners are recommended for maximum comfort indoors and while traveling via automobile.

Throughout the year, rainfall occurs more frequently during the night. Usually, periods of rainy weather last for only a day or two, and are followed by several days with fair skies. A large part of the annual precipitation results from thunderstorm activity, with occasional heavy rainfall over brief periods of time. Thunderstorms occur throughout the year, but are most frequent in the spring. Hail falls on about two or three days a year, ordinarily with only slight and scattered damage. Windstorms occurring during thunderstorm activity are sometimes destructive. Snowfall is uncommon.

Although the terms "Northeastern Texas" or "North Texas" are not official state designations, the Texas State Data Center and Office of the State Demographer lists the following counties as belonging to the North Central Texas Council of Governments (NCTCOG): 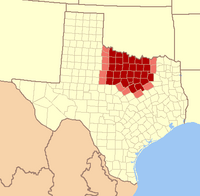 The Texas State Demographer also lists the following regional county groupings, some or all of which are often included in the informal meaning of the terms "North Texas" or "North Central Texas."

Additionally, some other Texas counties contiguous with those named above are sometimes included in the general meaning of "North Texas."

Other cities and towns 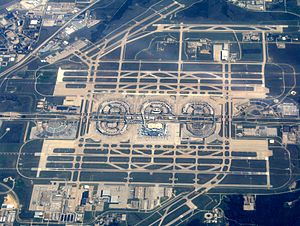 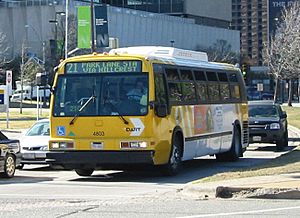 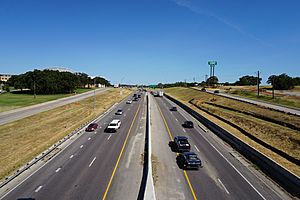 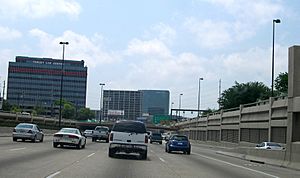 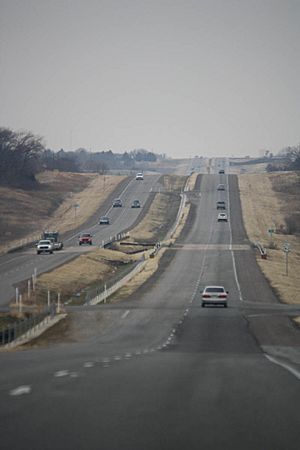 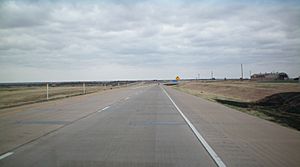 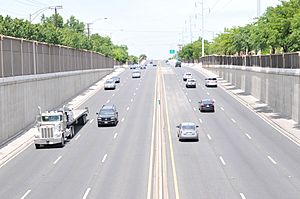 All content from Kiddle encyclopedia articles (including the article images and facts) can be freely used under Attribution-ShareAlike license, unless stated otherwise. Cite this article:
North Texas Facts for Kids. Kiddle Encyclopedia.