Palo Pinto County is a county located in the U.S. state of Texas. As of the 2010 census, its population was 28,111. The county seat is Palo Pinto. The county was created in 1856 and organized the following year.

Palo Pinto County comprises the Mineral Wells, TX Micropolitan Statistical Area, which is part of the Dallas–Fort Worth, TX Combined Statistical Area. It is located in the Western Cross Timbers Ecoregion. 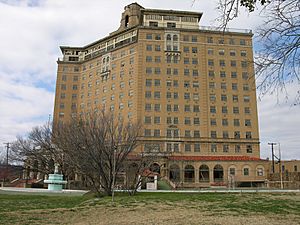 The Brazos Indian Reservation, founded by General Randolph B. Marcy in 1854, provided a safety area from warring Comanche for Delaware, Shawnee, Tonkawa, Wichita, and Caddo. Within the reservation, each tribe had its own village and cultivated agricultural crops. Government-contracted beeves were delivered each week. Citizens were unable to distinguish between reservation and non-reservation tribes, blaming Comanche and Kiowa depredations on the reservation Indians. A newspaper in Jacksboro, Texas titled The White Man advocated removal of all tribes from north Texas.

During December 1858, Choctaw Tom, at times an interpreter to Sam Houston, and a group of reservation Indians received permission for an off-the-reservation hunt. On December 27, Captain Peter Garland and a vigilante group charged Choctaw Tom’s camp, indiscriminately murdering and injuring women and children along with the men. Citizens feared retribution from reservations tribes.

Governor Hardin Richard Runnels ordered John Henry Brown to the area with 100 troops. An examining trial was conducted about the Choctaw Tom raid, but no indictments resulted.

May 1859, John Baylor and a number of whites confronted United States troops at the reservation, demanding the surrender of certain tribal individuals. The military balked, and Baylor retreated, but in so doing killed an Indian woman and an old man. Baylor’s group was later attacked by Indians off the reservation, where the military had no authority to intervene. At the behest of terrified settlers, the reservation was abandoned that year.

In 1856 the Texas state legislature established Palo Pinto County from Bosque and Navarro counties and named for Palo Pinto Creek. The county was organized the next year, with the town of Golconda chosen to be the seat of government. The town was renamed Palo Pinto in 1858.

Ranching entrepreneurs Oliver Loving and Charles Goodnight, who blazed the Goodnight-Loving Trail, along with Reuben Vaughan were the nucleus of the original settlers. An 1876 area rancher meeting regarding cattle rustling became the beginnings of what is now known as the Texas and Southwestern Cattle Raisers Association

Fence Cutting Wars in Texas lasted for approximately five years, 1883-1888. As farmers and ranchers began to compete for precious land and water, cattlemen found it more difficult to feed their herds, prompting cowboys to cut through fences. Texas Governor John Ireland prodded a special assembly to order the fence cutters to cease. In response, the legislature made fence-cutting and pasture-burning crimes punishable with prison time, while at the same time regulating fencing. The practice abated with sporadic incidents of related violence 1888.

James and Amanda Lynch first moved to the area in 1877. In digging a well on their property, they discovered the water seemed to benefit their well-being. Word spread about the water’s healing powers, and people from all over came to experience the benefits. Eventually, the town of Mineral Wells was platted. The Mineral Wells State Park was opened to the public in 1981.

The Texas National Guard organized the 56th Cavalry Brigade in 1921, and four years later Brigadier General Jacob F. Wolters was given a grant to construct a training camp for the unit. In 1941, Camp Wolters was turned over to the United States Army. It was redesignated Wolters Air Force Base in 1951. Five years later, the base reverted to the Army as a helicopter trailing school . The base closed in 1973 when the helicopter school transferred to Fort Rucker in Alabama.

Possum Kingdom Lake was acquired from the Brazos River Authority in 1940. The Civilian Conservation Corps constructed the facilities, and the Possum Kingdom State Park opened to the public in 1950.

Upham Oil and Gas Company has operated in Palo Pinto County since its founding in 1956 by the late Chet Upham of Mineral Wells, who was also the chairman of the Texas Republican Party from 1979-1983. The company is now run by his son, Chester Robert Upham, III.

Circa 1992, licensed wildlife rehabilitator Amanda Lollar purchased an old building in Mineral Wells that had become a residence for thousands of wild bats. Lollar operated the building as Bat World Sanctuary.

All content from Kiddle encyclopedia articles (including the article images and facts) can be freely used under Attribution-ShareAlike license, unless stated otherwise. Cite this article:
Palo Pinto County, Texas Facts for Kids. Kiddle Encyclopedia.