Palo Pinto is a census-designated place (CDP) and unincorporated community and county seat in Palo Pinto County, Texas, United States. This was a new CDP for the 2010 census with a population of 333. 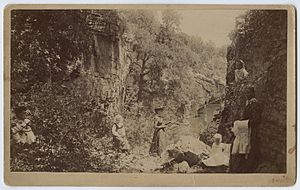 When legislation calling for organization of Palo Pinto County was passed in 1856, a community was designated to be built within 5 miles of the center of the county to serve as the seat of government. The county was formally organized in May 1857, and on August 18 of the same year the first session of the county court was held, at which time the plans for the new county seat were discussed and enacted. The community, then called Golconda, was laid out soon thereafter and received its post office in March 1858. It was around this time that the town (and, soon after, post office) were renamed Palo Pinto.

The first Palo Pinto County Courthouse was built in 1857, and a two-story stone jail was built soon after. By 1860, Palo Pinto possessed a hotel, a law firm, several saloons and its own school. The Civil War, however, had a dire effect on commerce in the community forcing several businesses to close. Over the next decade or so, it evolved into a shipping point for the local ranching industry. The county's first newspaper opened in 1876, and throughout the 1870s the town remained the center of government, commerce, and the only town and principal settlement in Palo Pinto County.

In 1880, Palo Pinto was bypassed by the Texas and Pacific Railway. Although it suffered, the population remained above 400 and it retained several businesses. The county seat has remained in Palo Pinto, even though it was surpassed as the largest town in the county by Mineral Wells many years ago. The current Palo Pinto County Courthouse, located on US 180 at the center of town, was built in 1940. The population reached a high mark of 550 in 1947 before declining to around 400, a mark it has maintained fairly consistently ever since.

All content from Kiddle encyclopedia articles (including the article images and facts) can be freely used under Attribution-ShareAlike license, unless stated otherwise. Cite this article:
Palo Pinto, Texas Facts for Kids. Kiddle Encyclopedia.