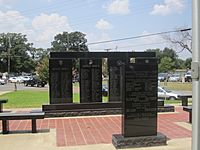 Navarro County ( nə-VAY-roh) is a county located in the U.S. state of Texas. As of the 2010 census, the population was 47,735. Its county seat is Corsicana. The county is named for José Antonio Navarro, a Tejano leader in the Texas Revolution who signed the Texas Declaration of Independence.

Navarro County was formed from Robertson County in 1846.

In 1860, after the election of Abraham Lincoln to the American presidency, Navarro County lowered the American flag at the courthouse in protest and instead hoisted the Texas flag. Thereafter early in 1861, some 450 Navarro County men enlisted in the new Confederate States Army. Two of the enlistees became outstanding officers, Roger O. Mills and Clinton M. Winkler, a Confederate colonel for whom Winkler County in southwest Texas is named. The county commissioners appropriated funds for weapons and ammunition and for the support of the soldiers' families.

The Navarro Rifles constituted an 87-man Confederate infantry unit, formed in Corsicana in July 1861 from area volunteers. They were founded by José Antonio Navarro, all of whose four sons fought for the Confederacy. Clinton Winkler, a founder of Navarro County, served as the initial captain. The group trained near Dresden, Spring Hill, and later Waco and Harrisburg, Texas. The Navarro Rifles became Company I of the Fourth Texas Volunteer Infantry Regiment. In September 1861, the unit reached Richmond, Virginia. The regiment was placed in the Texas Brigade under the command of General John Bell Hood.

All content from Kiddle encyclopedia articles (including the article images and facts) can be freely used under Attribution-ShareAlike license, unless stated otherwise. Cite this article:
Navarro County, Texas Facts for Kids. Kiddle Encyclopedia.