Somervell County ( SUM-er-vell) is a county on the Edwards Plateau in the U.S. state of Texas. As of the 2010 census, its population was 8,490. Its county seat is Glen Rose. The county is named for Alexander Somervell, Secretary of War for the Republic of Texas. 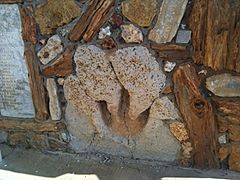 Fossil footprint of a dinosaur displayed on the lawn of the Somervell County, Texas courthouse, Glen Rose, Texas, April 1, 2010. 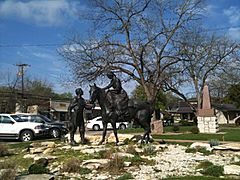 Caddo tribe Anadarko villages were scattered along Trinity and Brazos Rivers. The Caddo tribe of Wichita also inhabited the area. The Anadarko became entangled with the French battles with the Spanish and later the Anglos and suffered the consequences, including diseases for which they had no immunity. By 1860, these tribes moved to Oklahoma.

The Tonkawa were hunter-gatherers of the area, and often traded with their allies the Caddo and Karankawa. Like the Wichita, Karankawa and Jumano, the Tonkawa tattooed their bodies and faces. Friendly with the white settlers, Tonkawa were employed as scouts for the Texas Rangers and United States Army. As they were pushed out by the Comanche, they moved to the Brazos Indian Reservation, and later to Oklahoma

Comanche bands continued depredations on settlers until their removal to Oklahoma after 1875.

The county was formed and organized in 1875 from Hood County. The town of Glen Rose became the county seat.

Torrey Trading Houses opened as a part of the Sam Houston peace policy to develop friendly relationships with native tribes. They bought from, and sold to, the Indians on a banking and credit system, enabling them to also recover stolen horses and human captives. The Torreys sold their business to George Barnard in 1848, who with his brother Charles moved the Tehuacana store in Limestone County to near Comanche Peak. Juana Josefina Cavazos had been captured by Comanches as a teenager. She was daughter of Maria Josefa Cavazos, and granddaughter of Don José Narciso Cavazos Gonzalez-Hildago who in 1792 received the largest land grant in Texas. George ransomed Juana from the tribe, but it was brother Charles who married her in 1848.

Somervell County got its first courthouse in Glen Rose in 1882, but the courthouse and all county records burned in 1893. The second and current courthouse was built in 1894 by architect John McCormick. The roof and clock tower were damaged in the 1902 Glen Rose tornado. County funds at the time limited the repair, which eliminated the clock tower. In 1986, work was done to restore the structure to its original design.

Glen Rose Collegiate Institute, AKA Glen Rose College, operated as a private faith-based educational facility from 1889 to 1910. Educational competition from the public school system caused enrollment to taper off until the institution was shut down.

Under the New Deal Works Progress Administration, Glen Rose built a new water and sewage system in the 1930s, as well as school buildings, a canning plant, and low-water dams.

The tragic Paluxy River flood in 1908 uncovered 3-toed prints from the Cretaceous period, possibly Acrocanthosaurus, and were discovered by high school student George Adams in the limestone river bed. The teenager related the discovery to his principal, Robert McDonald. Adams later ended up selling self-manufactured fake "giant man tracks" to tourists sometime during the 1930s, sparking a debate about whether or not humans existed alongside dinosaurs. In 1934, resident Charlie Moss discovered footprints of 4-toed sauropods. Resident Jim Ryals dug out the actual dinosaur prints and sold them to tourists. Paleontologist Roland T. Bird of the American Museum of Natural History in New York spotted the Adams "giant man tracks" in a tourist shop in Gallup, New Mexico, and, while recognizing them as fakes, was still intrigued enough to travel to Somervell County to see the Glen Rose area for himself. Bird's visit resulted in a 2-year WPA project to uncover the dinosaur prints. The American Museum of Natural History, the University of Texas at Austin, the Smithsonian Institution, and several local museums retain samples of what are said to be the best-preserved tracks in the United States.

The land along the Paluxy River for Dinosaur Valley State Park was purchased by the State of Texas in 1968, and the park opened to the public in 1972.

All content from Kiddle encyclopedia articles (including the article images and facts) can be freely used under Attribution-ShareAlike license, unless stated otherwise. Cite this article:
Somervell County, Texas Facts for Kids. Kiddle Encyclopedia.