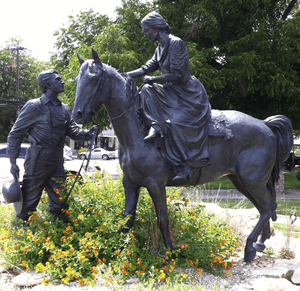 Glen Rose is a city in and the county seat of Somervell County, Texas, United States. As of the 2012 census estimate, the city population was 2,502.

The area was first settled in 1849 by Charles Barnard, who opened a trading post near Comanche Peak. After the region became a federal Indian reservation in 1855, Barnard moved his business to Fort Belknap. Circa 1859 when the reservation was abolished, he returned to the area and built the first store on what is now the site of Glen Rose.

A three-story stone gristmill was constructed along the Paluxy River and the town that grew up around it became known as Barnard's Mill. The mill was sold to T.C. Jordan of Dallas in 1871 for $65,000. Jordan's wife, a native of Scotland, decided to rename the town Rose Glen to reflect the area's natural surroundings. The citizens later voted to call the community Glen Rose. A post office opened in 1874.

When Somervell County was formed on March 15, 1875, Glen Rose was designated as its county seat. A Baptist college was organized in 1879 and was later sold to the Paluxy Baptist Association. In 1889, the northern Presbyterians opened Glen Rose Collegiate Institute (also known as Glen Rose College), which remained in operation for the next 15 to 20 years. A courthouse around Glen Rose's town square was completed around 1892, but burned down a year later. A newly built Romanesque Revival style courthouse was constructed soon after with locally quarried limestone. That building sustained damage in a 1902 tornado that also damaged part of the town square.

Throughout the period from the 1900s to the 1920s, Glen Rose was home to approximately 1,000 people. The area's mineral springs attracted numerous doctors and self-styled healers to the community. During Prohibition, the area was a center of moonshining and Glen Rose became known as the "whiskey woods capital of the state." The population remained steady during the Great Depression, although unemployment rates in both Glen Rose and Somervell County increased. As part of the New Deal, Glen Rose borrowed $80,000 under the Public Works Administration (PWA) to construct a new water and sewage system. Three low-water dams on the Paluxy River, several local school buildings, and a canning plant were built with Works Projects Administration (WPA) money.

During the post-war years, the population of Somervell County declined from 3,071 in 1940 to 2,542 in 1950 as many residents moved in search of greater employment opportunities. At the same time, Glen Rose grew from 1,050 residents in 1940 to 1,248 in 1950. The construction of the Comanche Peak Nuclear Power Plant in the mid-1970s brought financial advantages and new residents to the Glen Rose area. The city experienced a 34 percent increase in population between 1970 and 1980. The nuclear plant came to dominate the local economy. Other chief industries include farming, ranching, and tourism. 111 rated businesses were located in Glen Rose as of 1991. By 2000, the population of the city had grown to 2,122 and the total number of rated businesses rose to 224.

The climate in this area is characterized by hot, humid summers and generally mild to cool winters. According to the Köppen Climate Classification system, Glen Rose has a humid subtropical climate, abbreviated "Cfa" on climate maps.

There were 801 households out of which 36.1% had children under the age of 18 living with them, 48.7% were married couples living together, 14.4% had a female householder with no husband present, and 32.1% were non-families. 29.1% of all households were made up of individuals and 14.9% had someone living alone who was 65 years of age or older. The average household size was 2.54 and the average family size was 3.13.

All content from Kiddle encyclopedia articles (including the article images and facts) can be freely used under Attribution-ShareAlike license, unless stated otherwise. Cite this article:
Glen Rose, Texas Facts for Kids. Kiddle Encyclopedia.