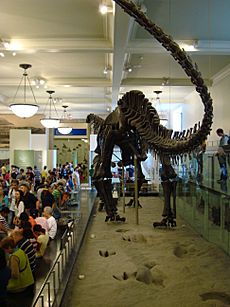 Slab of the trackway mounted at the AMNH, with Apatosaurus in the background

The Paluxy River, also known as Paluxy Creek, is a river in the U.S. state of Texas. It is a tributary of the Brazos River. It is formed by the convergence of the North Paluxy River and the South Paluxy River near Bluff Dale, Texas in Erath County and flows a distance of 29 miles (47 km) before joining the Brazos just to the east of Glen Rose, Texas in south central Somervell County.

It is best known for numerous dinosaur footprints found in its bed near Glen Rose at the Dinosaur Valley State Park. The Paluxy River became famous for controversy in the early 1930s when locals found dinosaur and supposed human footprints in the same rock layer in the Glen Rose Formation, which were widely publicized as evidence against the geological time scale and in favor of young-Earth creationism. However, these anachronistic "human" footprints have been determined to be mistaken interpretation or hoaxes. 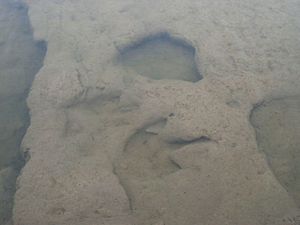 Many dinosaur trackways and footprints have been discovered in the riverbed, some as early as 1908. Most tracks in the area were found in Cretaceous limestone. One of the most well-known is the chase sequence, which contains the tracks of a herd of sauropods and at least one theropod following the herd. The tracks have been attributed to Sauroposeidon and Acrocanthosaurus, respectively. Other well-known and studied sites containing similar trackways are the Taylor Site, the Blue Hole Ballroom, and the Blue Hole Parlor. In 1938, paleontologist Roland T. Bird discovered tracks in the Paluxy River. The documenting and publishing of these findings made the site famous and attracted the attention of researchers, some of whom began to claim that some of the tracks were human footprints.

In 2014, a digital model was made of the chase sequence trackways from photographs taken in 1940 by Bird. The photographs were used to create the digital reconstruction of the tracks as they were in 1940, before excavations. Though the reconstruction shows high variations in quality in different parts of the model, it provides a good demonstration of historical photogrammetry used to model deteriorated sites and specimens.

All content from Kiddle encyclopedia articles (including the article images and facts) can be freely used under Attribution-ShareAlike license, unless stated otherwise. Cite this article:
Paluxy River Facts for Kids. Kiddle Encyclopedia.