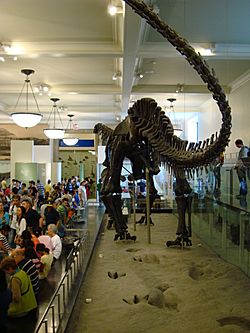 Glen Rose theropod and sauropod tracks, with mounted Apatosaurus in the background, AMNH

Acrocanthosaurus was a genus of theropod dinosaur that lived in North America during the Lower Cretaceous period. Its name means "high-spined lizard". This refers to the spines on its vertebrae which formed a sail or hump when the animal was alive.

Its classification is uncertain. It was originally classified as a spinosaur, because the spines on its back looked like those of Spinosaurus. However, Acrocanthosaurus is now classified as a carnosaur. Most paleontologists believe that it was a carcharodontosaurid.

Acrocanthosaurus was 39 feet long, almost as large as Tyrannosaurus rex, and weighed about 6 or 7 short tons. It was the largest theropod in North America before the evolution of the tyrannosaurs.

Long, low ridges start at the nasal bones. They run along each side of the snout from the nostril back to the eye, and they continued onto the lacrimal bones. This is a characteristic feature of all allosaurids.

There is a famous trackway in Paluxy, Texas, which shows tracks of what might be an Acrocanthosaurus and its prey. While interesting and plausible, this hypothesis is difficult to prove and there are other explanations.

Acrocanthosaurus was featured in an episode of the television documentary Monsters Resurrected. It was depicted as the top predator in early Cretaceous North America. A juvenile was scared away from its kill by a pack of Deinonychus, and was forced to hunt more difficult prey, such as a Sauropelta.

All content from Kiddle encyclopedia articles (including the article images and facts) can be freely used under Attribution-ShareAlike license, unless stated otherwise. Cite this article:
Acrocanthosaurus Facts for Kids. Kiddle Encyclopedia.