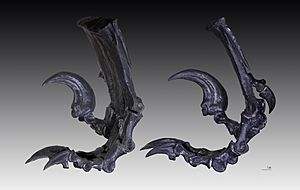 Deinonychus was a medium theropod dinosaur. It was a dromaeosaur, and also a larger relative of the famous Velociraptor. This 3.4 meter (11 ft) long Deinonychus lived during the Lower Cretaceous, about 115-108 million years ago. Fossils have been found in the U.S. states of Montana, Wyoming, and Oklahoma.

Deinonychus is perhaps the single most important dinosaur discovered in the mid 20th century.

Deinonychus remains have been found near those of the ornithopod Tenontosaurus. Teeth discovered near Tenontosaurus specimens suggest it was hunted or at least scavenged by Deinonychus.

All content from Kiddle encyclopedia articles (including the article images and facts) can be freely used under Attribution-ShareAlike license, unless stated otherwise. Cite this article:
Deinonychus Facts for Kids. Kiddle Encyclopedia.