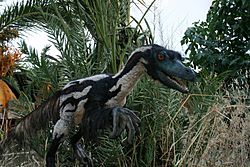 The hands are not correct, but the model is still interesting

Half the total body length was the tail 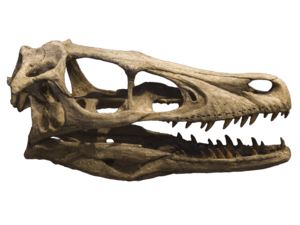 Lightweight skull of Velociraptor: its brain was tucked away at the back
of the skull.

Velociraptor was a small theropod dromaeosaur of the Upper Cretaceous, about 75–71 million years ago, and also a smaller relative of the famous Deinonychus.

It was a slender, lightly built carnivore. It was about two meters long (nearly seven feet) and 0.62 meters tall at the hip, bigger than the common chimpanzee.

Velociraptor had one sickle-shaped claw on its foot which measured 6.5 centimeters along its length, and a smaller one on each hand. Velociraptor was warm blooded and had feathers.

Fossils from China suggest that the whole clade had similar traits.

Fossils of Velociraptor were first found in the Gobi Desert of Mongolia in 1922. In 1988, scientists from China found Velociraptor skeletons in northern China.

A famous Velociraptor, discovered in 1971, was found attacking a Protoceratops in a fossil from Mongolia.

In September 2007 researchers found quill knobs on the forearm of a Velociraptor found in Mongolia. These bumps on bird wing bones show where feathers anchor, and their presence on Velociraptor indicate it too had feathers.

The majority view is that dinosaur feathers were primarily adaptations for temperature regulation, and that other uses came later.

Specimens from two species have been found:

In both cases the ecology of the time was dry, with sand dunes with occasional streams.

Films such as Jurassic Park and some of The Land Before Time films helped make Velociraptor popular. However, the raptors in Jurassic Park were far larger than the real thing. They were the size of Deinonychus, a larger member of the same clade. The films also exaggerated its probable intelligence.

All content from Kiddle encyclopedia articles (including the article images and facts) can be freely used under Attribution-ShareAlike license, unless stated otherwise. Cite this article:
Velociraptor Facts for Kids. Kiddle Encyclopedia.