Andorra la Vella is the capital city of the principality of Andorra and is one of the seven parishes of Andorra. It is in the southwestern part of the country.

The Andorra la Vella parish is in the southwestern part of the country at the confluence of two mountain streams, the Valira del Nord (Northern Valira) and the Valira de l'Orient (Eastern Valira), which join to form the Gran Valira that flows through the capital city.

Evolution of the population in Andorra la Vella 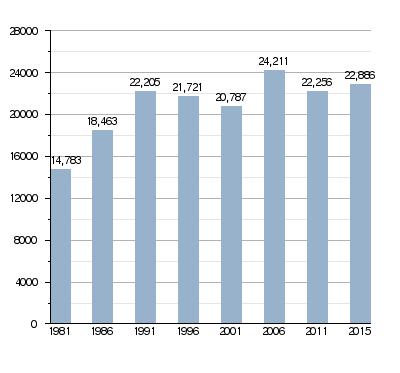 The urban areas in the parish are:

Andorra la Vella is the country's commercial centre. The city is also the centre for many banks and businesses. The state is not a member of the European Union, but has a customs arrangement with the EU, and uses the euro.

All content from Kiddle encyclopedia articles (including the article images and facts) can be freely used under Attribution-ShareAlike license, unless stated otherwise. Cite this article:
Andorra la Vella Facts for Kids. Kiddle Encyclopedia.