Sucre is the capital city of Bolivia. It was also known as Charcas, La Plata, and Chuquisaca in the past. About 250,000 people lived there in 2006. Sucre lies at an altitude of 2,800 metres (9,200 ft) and is the sixth largest city in Bolivia. The city is named after Antonio José de Sucre, an 18th century revolutionary leader.

On November 30, 1538, Sucre was founded under the name Ciudad de la Plata de la Nueva Toledo (City of Silver of New Toledo) by Pedro Anzures, Marqués de Campo Redondo. In 1559, the Spanish King Philip II established the Audiencia de Charcas in La Plata with authority over an area which covers what is now Paraguay, southeastern Peru, Northern Chile and Argentina, and much of Bolivia. The Audiencia de Charcas was a subdivision of the Viceroyalty of Peru until 1776, when it was transferred to the newly created Viceroyalty of the Río de la Plata. In 1601 the Recoleta Monastery was founded by the Franciscans and in 1609 an archbishopric was founded in the city. In 1624 St Francis Xavier University of Chuquisaca was founded.

Very much a Spanish city during the colonial era, the narrow streets of the city centre are organised in a grid, reflecting the Andalusian culture that is embodied in the architecture of the city's great houses and numerous convents and churches. Sucre remains the seat of the Roman Catholic Church in Bolivia, and a common sight is members of religious orders dressed in traditional costume. For much of its colonial history, Sucre's temperate climate was preferred by the Spanish royalty and wealthy families involved in silver trade coming from Potosí. Testament to this is the Glorieta Castle. Sucre's University (Universidad Mayor Real y Pontificia de San Francisco Xavier de Chuquisaca) is one of the oldest universities in the new world. 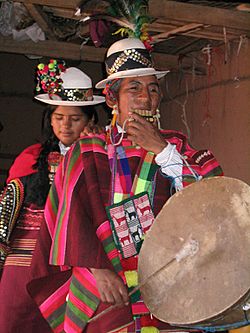 On May 25, 1809 the Bolivian independence movement was started with the ringing of the bell of the Basilica of Saint Francisco. This bell was rung to the point of breakage, but it can still be found in the Basilica today: it is one of the most precious relics of the city. Until the 19th century, La Plata was the judicial, religious and cultural centre of the region. It was proclaimed provisional capital of the newly independent Alto Peru (later, Bolivia) in July 1826. On July 12, 1839, President José Miguel de Velasco proclaimed a law naming the city as the capital of Bolivia, and renaming it in honor of the revolutionary leader Antonio José de Sucre. After the economic decline of Potosí and its silver industry, Sucre lost the Bolivian seat of government when it was moved to La Paz in 1898. Many argue Sucre was the location of the beginning of the Latin American independence movement against Spain. The first "Grito Libertario" (Shout for Freedom) in any Western Hemisphere Spanish colony is said to have taken place in Sucre in 1809. From that point of view, Bolivia was the last Spanish imperial territory in South America to gain its independence, in 1825. In 1991 Sucre became a UNESCO World Heritage Site.

The city attracts thousands of tourists every year due to its well-preserved downtown with buildings from the 18th and 19th centuries. Nestled at the foot of the twin hills of Churuquella and Sika Sika, Sucre is the gateway to numerous small villages that date from the colonial era, the most well-known of which is Tarabuco, home of the colorful "Pujllay" festival held each March. Most of these villagers are members of one of the indigenous ethnicities. Many dress in clothing distinctive to their respective villages. 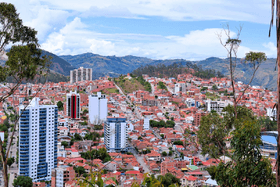 Sucre is divided into eight numbered districts: the first five of these are urban districts, while Districts 6, 7, and 8 are rural districts. Each is administered by a Sub-Mayor (Spanish: Subalcalde), appointed by the Mayor of Sucre. The rural districts include numerous rural communities outside the urban area.

Sucre is served by Alcantari Airport, situated 30 km (19 mi) to the South.

Sucre has a subtropical highland climate with mild temperatures year round.

All content from Kiddle encyclopedia articles (including the article images and facts) can be freely used under Attribution-ShareAlike license, unless stated otherwise. Cite this article:
Sucre Facts for Kids. Kiddle Encyclopedia.