Concepción is the second city in importance of the Republic of Chile with 889,725 inhabitants (2002 census).

Concepción was founded by Pedro de Valdivia in 1550 north of the Bío-Bío River, at the site which is today known as Penco. At that time it was given the name Concepción del Nuevo Extremo. The new settlement of Concepción was just a few kilometers north of La Frontera (The Frontier), the boundary between Spanish territory and the land of the Mapuche, an American Indian ethnic group that remained independent until the 1870s. The settlement was formally recognized by the Spanish authorities as a town two years later by a royal decree. It was given a coat-of-arms that is still in use today. 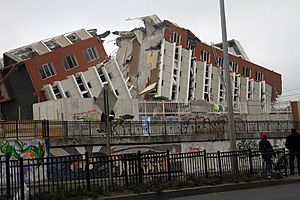 On February 27, 2010, an 8.8 magnitude earthquake struck the city of Concepción, killing more than 700 people and injuring thousands nationwide. Following the earthquake, geologists relying on global positioning satellite (GPS) data concluded that the city had been displaced roughly 3 meters (10 feet) to the west as a result of the event. Fortunately, the city avoided the tsunami that followed the earthquake.

The climate of Concepción is classified as Köppen climate classification csb, with a dry summer nadir in February. It has an oceanic influence which keeps temperatures mild throughout the year. Wet snows are possible in winter, but snow does not remain for long. The chart at right provides a climate summary for Concepción.

All content from Kiddle encyclopedia articles (including the article images and facts) can be freely used under Attribution-ShareAlike license, unless stated otherwise. Cite this article:
Concepción Facts for Kids. Kiddle Encyclopedia.