The Bío Bío Region (Spanish: Región del Biobío) is one of Chile's 16 first order administrative divisions. Its capital is Concepción, the second city of Chile after the national capital, Santiago.

The region is named after its main river: the Bío Bío river.

The Spanish conquistador Pedro de Valdivia founded the city of Concepción in 1550 at the mouth of the Bío Bío river. He died in 1553 during the Arauco War against the Mapuche people.

The Region has been hit by many earthquakes, including the most powerful earthquake ever recorded (the Great Chilean Earthquake in 1960) and the earthquake of 2010, when many communities in the region were greatly affected by the earthquake and the following tsunami.

It borders the Ñuble region to the north, Argentina to the east, the Araucanía region to the south and the Pacific Ocean on the west.

The main river in the region is the

The Bío Bío Region, with 1,557,414 inhabitants (2017 census), is the third region with more people living in it, after the Valparaíso Region. Its population density was 65.2. 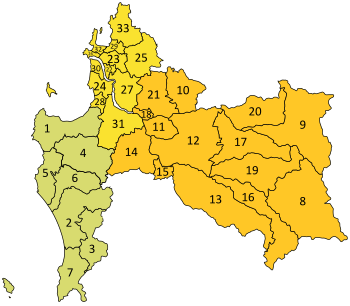 All content from Kiddle encyclopedia articles (including the article images and facts) can be freely used under Attribution-ShareAlike license, unless stated otherwise. Cite this article:
Bío Bío Region Facts for Kids. Kiddle Encyclopedia.