The XV Arica and Parinacota Region (Spanish: XV Región de Arica y Parinacota) is one of Chile's 15 first order administrative divisions. It is the country's newest region, created under Law 20.175. It became operational on 8 October 2007.

The Arica and Parinacota borders Peru to the north, Bolivia to the east and Chile's Tarapacá region to the south.

The region is within the Norte Grande (Far North) natural region. It combines deserts, green valleys, the steep and volcanic Andes mountains, and the Altiplano (high plain) to the east. A narrow coastal strip of low-lying land no more than 2 kilometres (1 mi) wide separates the Pacific's Nazca plate from the Andes. Its Parinacota volcano is the region's highest elevation at 6,348 metres (20,827 ft) and is on the northern border with Bolivia in Lauca National Park.

The largest city in the region is Arica, with 210,936 inhabitants. 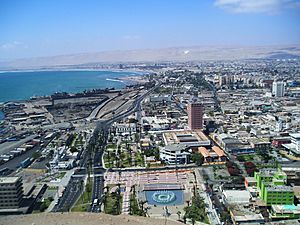 Arica - a view from El Morro

In 2007, the region was subdivided to create the Arica y Parinacota region and the present day Tarapacá Region to the south. The region is further subdivided into two provinces: Arica and Parinacota. 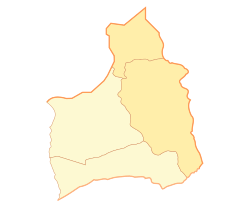 All content from Kiddle encyclopedia articles (including the article images and facts) can be freely used under Attribution-ShareAlike license, unless stated otherwise. Cite this article:
Arica y Parinacota Region Facts for Kids. Kiddle Encyclopedia.