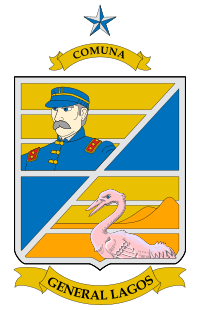 Coat of arms of General Lagos.

General Lagos is a city in the region of Arica and Parinacota, in the north of Chile. It is named after Pedro Lagos, who directed the assault to the morro de Arica, during the battle of Arica. It was founded in December 30, 1927 as Comuna de General Lagos and they are called visvireños, since the most important area in the town is called Visvirí.

All content from Kiddle encyclopedia articles (including the article images and facts) can be freely used under Attribution-ShareAlike license, unless stated otherwise. Cite this article:
General Lagos Facts for Kids. Kiddle Encyclopedia.