War of the Pacific facts for kids 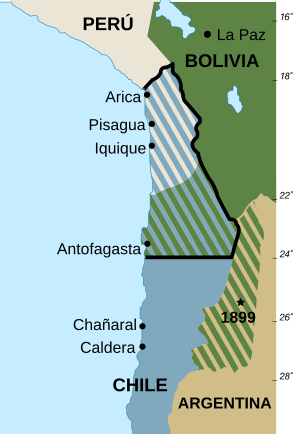 Boundary changes as a result of the war

The War of the Pacific (or Saltpeter War) took place from 1879-1883. It grew out of a dispute between Bolivia and Peru against Chile over control of a part of the Pacific coast. The disputed area was part of the Atacama Desert that lies between the 23rd and 26th parallels. The territory contained valuable mineral resources, mainly potassium nitrate, which were exploited by Chilean companies and British interests. The Bolivian government decided to increase taxes to take advantage of the increasing income of the region, which led to a commercial dispute.

The result of the war was that Bolivia lost its access to the ocean, and became landlocked.

All content from Kiddle encyclopedia articles (including the article images and facts) can be freely used under Attribution-ShareAlike license, unless stated otherwise. Cite this article:
War of the Pacific Facts for Kids. Kiddle Encyclopedia.