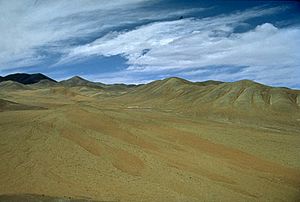 The Atacama Desert, in Chile

The Atacama Desert is a desert. It is on the Tropic of Capricorn in northern Chile, and is one of the driest places on earth. In some places, less than an inch (25mm) of rain falls every ten years. Only one of the rivers from the Andes mountains reaches the ocean through the desert. The rest disappear into the dry soil.

The Atacama is a desert not because mountains make a rain shadow, but because the ocean does. The water on the west part of Chile is quite cold, because it came from Antarctica. Moisture cannot stay in the cold air above the cold water, so mainly fog reaches the land, but very little rain. The people of Chile have learned how to get water from the fog to help them live. They "harvest" the clouds by putting up plastic sheets with pans underneath. The fog collects on the plastic and drips into the pans, giving the people water for crops and drinking. In parts of this desert it has not rained for over 400 years. Even though the Atacama is the driest place in the world that does not mean it is the hottest. The Atacama Desert is actually a really cold place with temperatures ranging from 0 to 30 degrees.

Three countries fought the War of the Pacific in the 1880s for control of the desert. They both wanted its Sodium nitrate mines. Chile won.

The oldest known artificially prepared mummies come from this desert. They are called the Chinchorro mummies.

All content from Kiddle encyclopedia articles (including the article images and facts) can be freely used under Attribution-ShareAlike license, unless stated otherwise. Cite this article:
Atacama Desert Facts for Kids. Kiddle Encyclopedia.