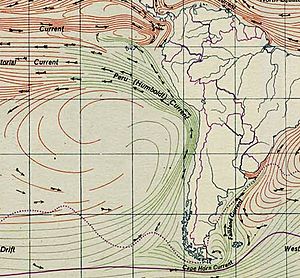 The Humboldt Current is a cold, low-salinity ocean current. It flows north along the west coast of South America from the southern tip of Chile to northern Peru. Also called the 'Peru Current', it flows in the direction of the equator. It extends 1,000 kilometers offshore.

The Humboldt Current is a large marine ecosystem, named after the Prussian naturalist Alexander von Humboldt. It is one of the major nutrient systems of the world, bringing nutrients up into the surface waters of the ocean. This supports an extraordinary abundance of marine life. Upwelling occurs off Peru year-round but off Chile only during the spring and summer. This is because the subtropical center of high pressure is displaced during the summer.

About 18-20% of the world’s fish catch comes from the Humboldt Current. The species are mostly pelagic: sardines, anchovies and jack mackerel. This high productivity supports other important fishery resources as well as marine mammals (eared seals and cetaceans) and seabirds. The cold, nutrient-rich water upwelling to the surface drives the system’s extraordinary productivity.

The Humboldt Current is part of a much larger system, the South Pacific Gyre.

All content from Kiddle encyclopedia articles (including the article images and facts) can be freely used under Attribution-ShareAlike license, unless stated otherwise. Cite this article:
Humboldt Current Facts for Kids. Kiddle Encyclopedia.