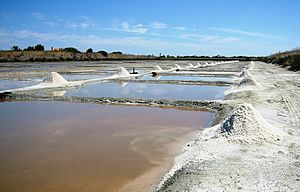 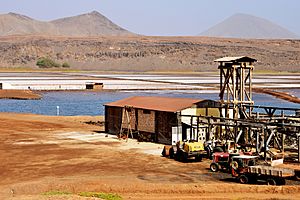 A Salt evaporation pond (or saltern pond) is a man-made shallow pond. Usually it is located near the sea. The ponds can be filled with salt water. The water is then left to evaporate. The salt is left behind, and can be harvested. Such ponds also provide a habitat for several kinds of animals. Most of these animals are birds.

The color tells how much salt there is left in the water. Green colors come from special algae. These algae are there in low to mid salinity ponds (ponds with little salt in the water). In middle to high salinity ponds, an alga called Dunaliella salina shifts the color to red. Millions of tiny brine shrimp create an orange cast in mid-salinity ponds. Other bacteria such as Stichococcus also contribute tints. These colors are especially interesting to airplane passengers or astronauts passing above due to their somewhat artistic formations of shape and color.

All content from Kiddle encyclopedia articles (including the article images and facts) can be freely used under Attribution-ShareAlike license, unless stated otherwise. Cite this article:
Salt evaporation pond Facts for Kids. Kiddle Encyclopedia.