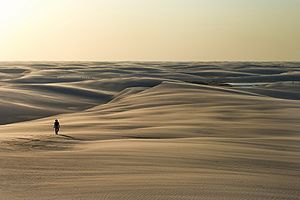 Dunes, Lençóis Maranhenses National Park, Maranhão: one of the most unusual habitats on Earth 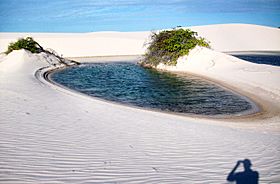 It is an area with low, flat, occasionally flooded land, between large sand dunes. It is about 1,500 km2 (580 sq mi). Despite abundant rain, it has almost no vegetation.

With large, white, sweeping dunes, Lençóis Maranhenses looks like a typical desert, but in fact it is not one. Being just outside the Amazon Basin, the region gets a regular rainy season in first half of the year. When it rains, fresh water collects in the valleys between sand dunes. The water is prevented from sinking down by a layer of rock underneath the sand. This results in blue, green and black lagoons surrounded by the desert-like sand. The lagoons are at their fullest their fullest between July and September.

When the lagoons are full, they are interconnected to rivers such as the Rio Negro. From the river, large numbers of fish arrive. One species of fish, however, is resident. The wolf fish or tiger fish (Hoplias malabaricus) stays dormant in the mud and moist areas after most of the water has evaporated, re-emerging during the next rainy season.

All content from Kiddle encyclopedia articles (including the article images and facts) can be freely used under Attribution-ShareAlike license, unless stated otherwise. Cite this article:
Lençóis Maranhenses National Park Facts for Kids. Kiddle Encyclopedia.