The XIV Los Ríos Region (Spanish: XIV Región de Los Ríos, Region of the Rivers) is one of Chile's 15 first order administrative divisions. Its capital and largest city is Valdivia.

It began to operate as a region on 2007, having been created by subdividing the Los Lagos Region in southern Chile. It consists of two provinces: Valdivia and the new El Ranco province, that was part of the Valdivia province.

It borders the La Araucanía region to the north, Argentina to the east, the Los Lagos region to the south and the Pacific Ocean on the west.

The largest city in the region is its capital, Valdivia, with 127,750 inhabitants (2002 census). The other provincial capital, La Unión had 25,615 inhabitants. 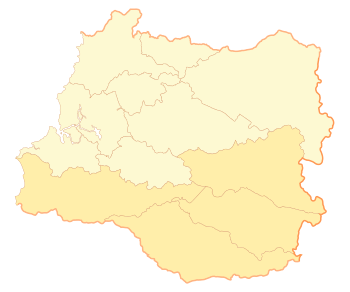 All content from Kiddle encyclopedia articles (including the article images and facts) can be freely used under Attribution-ShareAlike license, unless stated otherwise. Cite this article:
Los Ríos Region Facts for Kids. Kiddle Encyclopedia.