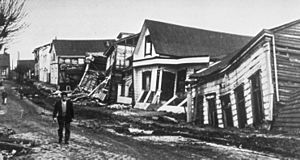 A street in Valdivia after the earthquake of 22 May 1960

Valdivia is a city, comune and municipality in southern Chile. Valdivia is the capital of Los Ríos Region (Spanish for Region of the Rivers), one of Chile's 16 regions.

It is located in a beautiful region of Chile which is known for its volcanoes, rivers, lakes, and landscapes.

On May 22, 1960, the most powerful earthquake on Earth occurred. With the magnitude of 9.5, it struck southern Chile. The earthquake stretched from about 311 miles-621 miles along its coast. The earthquake was named after the city that was most affected by the quake, Valdivia.

The earthquake was caused by the Nazca plate releasing tension and descending 50 feet underneath South America. The quake lasted for about 10 minutes.

All content from Kiddle encyclopedia articles (including the article images and facts) can be freely used under Attribution-ShareAlike license, unless stated otherwise. Cite this article:
Valdivia Facts for Kids. Kiddle Encyclopedia.