Mount Pleasant is a city in the U.S. state of Michigan. Located in Central Michigan, the city is the county seat of Isabella County. The population was 21,688 as of the 2020 United States census. It is surrounded by Union Township but is politically independent.

Part of the city (with a population of 8,741) is located within the Isabella Indian Reservation, the base of the federally recognized Saginaw Chippewa Tribal Nation. The tribe's Soaring Eagle Casino & Resort in nearby Chippewa Township is also within the reservation boundaries.

The city is home to the main campuses of Central Michigan University, one of the largest universities in the state with 20,000 students at Mount Pleasant, and Mid Michigan Community College. The student population nearly doubles the population of the city during the academic year, making it a college town. 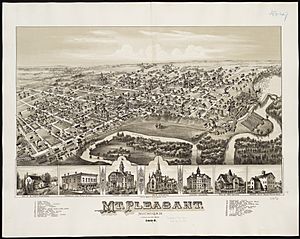 Until the mid-19th century, this area was occupied by historical bands of the Ojibwa people, known by English speakers as the Chippewa. In the early decades of the century, they ceded vast amounts of land to the United States government, which wanted to extinguish Native American land titles to enable settlement by European Americans.

The federal Graduation Act of 1854 allowed European-American settlers to purchase land from the government at discount rates, and the first white settlers began to arrive in what became Mount Pleasant. Under the Treaty of 1855, the Ojibwa bands (Saginaw Chippewa Tribe) from the Saginaw, Swan Creek, and Black rivers were relocated to land in Isabella County (Isabella Indian Reservation). Many non-natives soon moved to Mount Pleasant, predicting prosperous relations with the natives. The Homestead Act of 1862 also attracted many new settlers, including new European immigrants, to Mount Pleasant to develop their stake on free lands offered by the US government in exchange for their labor in developing it for residence and agriculture.

The village and future city developed. In 1875, a devastating fire started at the Fancher Building on the north corner of Broadway and Main streets. It moved east down Broadway, destroying several buildings. Seven years later another fire would damage buildings on the south side of Broadway. 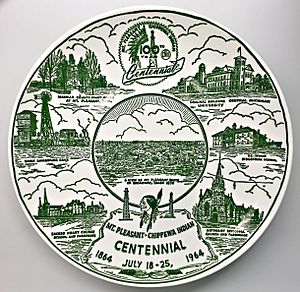 Kettlespring Kilns made a plate celebrating Mt. Pleasant's centennial in 1964

In 1879 the first library was established in Mt. Pleasant. Known as "The Library, Literary, and Musical Association of Mount Pleasant," its first books were made up of the personal book collections of the board members. In 1890, W.A. Jordan started Mount Pleasant Business College. Expanding in 1892, the school changed its name to Central Michigan Normal School and Business Institute, the beginnings of what is now Central Michigan University.

On January 3, 1893, the U.S. government opened an Indian boarding school called the Mount Pleasant Indian Industrial School. Indian children were encouraged to give up their cultural ways and assimilate to European-American culture. The school operated for 40 years, closing in 1933. Since the late 20th and early 21st centuries, the role of such schools has been re-evaluated and the damage done to children by such efforts has been acknowledged. Various Native American groups have taken action to help people reconcile their experiences. On July 17, 2009, the White Bison Wellbriety Journey for Forgiveness made a stop in the Mount Pleasant community to recognize this part of the city's history. The building now stands abandoned. The Saginaw Chippewa Tribal Nation has purchased the boarding school from the state of Michigan.

In 1928, large quantities of oil were discovered in the Mt. Pleasant area. A farm owned by the Lilly family was the first to strike, producing hundreds of barrels a day. Although oil resources eventually diminished, this legacy is represented in the Mt. Pleasant city seal, which includes an image of an oil drill. Mt. Pleasant High School's mascot, the Oiler, also refers to the city's history of oil production.

There were 8,376 households, of which 18.7% had children under the age of 18 living with them, 24.3% were married couples living together, 9.3% had a female householder with no husband present, 3.4% had a male householder with no wife present, and 63.0% were non-families. 31.6% of all households were made up of individuals, and 8.6% had someone living alone who was 65 years of age or older. The average household size was 2.35 and the average family size was 2.86.

All content from Kiddle encyclopedia articles (including the article images and facts) can be freely used under Attribution-ShareAlike license, unless stated otherwise. Cite this article:
Mount Pleasant, Michigan Facts for Kids. Kiddle Encyclopedia.