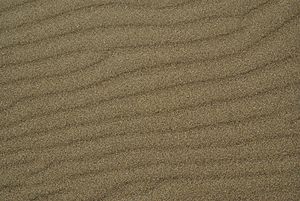 In geology, a placer deposit or placer is an accumulation of valuable minerals formed by gravity separation from a specific source rock during sedimentary processes. The name is from the Spanish word placer, meaning "alluvial sand". Placer mining is an important source of gold, and was the main technique used in the early years of many gold rushes, including the California Gold Rush. Types of placer deposits include alluvium, eluvium, beach placers, and paleoplacers.

Placer materials must be both dense and resistant to weathering processes. To accumulate in placers, mineral particles must be significantly denser than quartz (whose specific gravity is 2.65), as quartz is usually the largest component of sand or gravel. Placer environments typically contain black sand, a conspicuous shiny black mixture of iron oxides, mostly magnetite with variable amounts of ilmenite and hematite. Valuable mineral components often occurring with black sands are monazite, rutile, zircon, chromite, wolframite, and cassiterite. 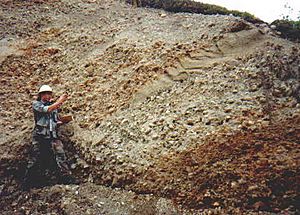 Section of alluvial placer deposit at the Blue Ribbon Mine, Alaska 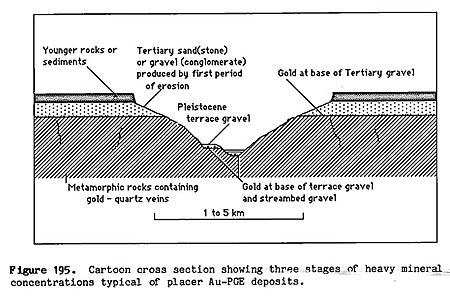 Alluvial placers are those formed in river or stream sediments. Typical locations for alluvial gold placer deposits are on the inside bends of rivers and creeks; in natural hollows; at the break of slope on a stream; the base of an escarpment, waterfall or other barrier.

Alluvial placers are formed by the deposition of dense particles at a site where water velocity remains below that required to transport them further.

To form a placer deposit, the particles desired must show a marked density contrast with the gangue material, which is able to be transported away from the trap site. Only if the deposit is winnowed in this way can the minerals be concentrated to economic levels. 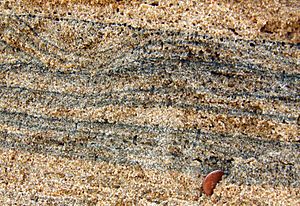 Beach placers are formed in sand and gravel deposited along the edge of large bodies of water.

All content from Kiddle encyclopedia articles (including the article images and facts) can be freely used under Attribution-ShareAlike license, unless stated otherwise. Cite this article:
Placer deposit Facts for Kids. Kiddle Encyclopedia.