The II Antofagasta Region (Spanish: II Región de Antofagasta) is one of Chile's 15 first order administrative divisions. It is the second-largest region of Chile. To the east it borders Bolivia and Argentina.

The capital of the region is the port city of Antofagasta.

The area away from the coast was populated by the Atacama people around the great dry salt lake called Salar de Atacama, the river basin of the Loa and valleys and oasis across the altiplano, with the most important settlement being the town of San Pedro de Atacama.

The region used to be Bolivian until the War of the Pacific started in 1879.

The Llullaillaco volcano is the region's highest elevation at 6,739 m (22,110 ft); it is on the border with Argentina.

The climate of the region is extremely arid (a desert climate) but somewhat milder near the coast and the highest mountains.

The three types of desert climate in the region are, (with the Köppen climate classification)

Nearly all of the region does not have any vegetation except close to the Loa river or at oases such as San Pedro de Atacama.

The Antofagasta region is divided in three provincesː 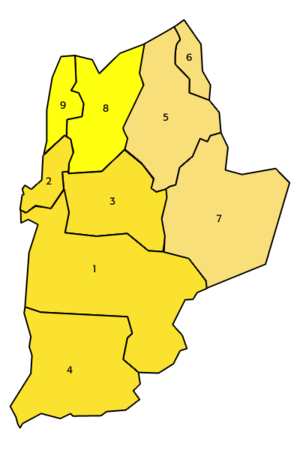 All content from Kiddle encyclopedia articles (including the article images and facts) can be freely used under Attribution-ShareAlike license, unless stated otherwise. Cite this article:
Antofagasta Region Facts for Kids. Kiddle Encyclopedia.