Kids Encyclopedia Facts
For a list of earthquakes in 2010 in Chile, see 2010 Chile earthquakes (disambiguation). 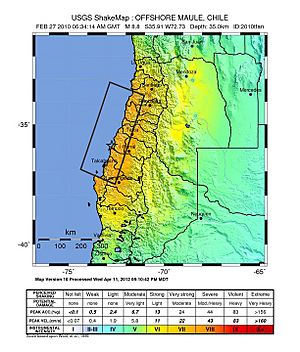 USGS shake map of the earthquake. 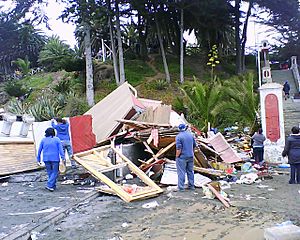 Destroyed kiosks near the Pichilemu's beach.

The epicenter of the earthquake was offshore from the Maule Region, approximately 8 km west of Curanipe and 115 km north-northeast of Chile's second largest city, Concepción. Also, the epicenter is less than 20 km due east from that of the 1960 Valdivia earthquake. Other cities exposed to Mercalli intensity scale intensity VIII (Destructive) shaking were Arauco, Lota and Constitución.

The earthquake was also felt in the Chilean capital Santiago as well as in some Argentinean cities. Tsunami warnings were issued in 53 countries. Michelle Bachelet, President of Chile, declared a "state of catastrophe". She also confirmed the deaths of at least 795 people.

Chile was hit by another earthquake in March 11, 2010, with epicenter in the coastern town of Pichilemu, Province of Cardenal Caro, almost 200 kilometers from Santiago de Chile. It was MW 6,9 in the Richter scale.

Main Beach of Pichilemu after the Earthquake, Saturday February 27, 2010.

All content from Kiddle encyclopedia articles (including the article images and facts) can be freely used under Attribution-ShareAlike license, unless stated otherwise. Cite this article:
2010 Cauquenes earthquake Facts for Kids. Kiddle Encyclopedia.