Pichilemu (Mapudungun for small forest pronunciation) is a city and commune of the central zone (centre part) of Chile. It is the capital of the Province of Cardenal Caro.

The beach of Pichilemu is called one of the best beaches in the world for surfing. The most famous beach in Pichilemu is Punta de Lobos, where competitions are commonly made. The city has become a beach resort. 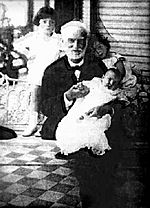 Promoucaes were the first people that populated Pichilemu. They were hunter gatherers and fishermen.

José Toribio Medina did his first archeological investigations in Pichilemu, and he published in 1908 Los Restos Indígenas de Pichilemu. He said there that Pedro de Valdivia gave land in what is now central Chile to Juan Gómez de Almagro on February 24, 1544. Pichilemu was between the areas of the Palloquierbico, Topocalma, and Gulaquien.

Some of the first land owners of Pichilemu were the Ortúzar family. Daniel Ortúzar is known as one of the founders of the original village of Pichilemu. The family of Ortúzar Cuevas, from the San Antonio de Petrel Hacienda, made a mid-century maritime dock which was as a fishing port for some years. They also built homes along the dock on what is now Ortúzar Avenue. More recently, other large land owners are Pedro Pavez Polanco and the Hacienda of San Antonio de Petrel. In 1891, during the Chilean Civil War, Daniel Ortúzar and the priest of Alcones were taken prisoners from Pichilemu through the dock. During the war, the dock was burned down. After the civil war, Pichilemu got its formal name and status. President Jorge Montt and his Minister, Manuel José Irarrázabal, the city was officially established on December 22, 1891.

Pichilemu has become the historic capital of the province called Cardenal Caro which is named for the first Chilean Catholic Church Cardinal. His father was the first mayor in the city.

Agustín Ross Edwards was a Chilean writer, Member of Parliament, minister and politician. Ross was very rich and based on his European background, he bought a 300-hectare piece of land and named it "La Posada" (English: The Inn), or Petren Fund, in 1885. Ross designed an urban place of high environmental value and landscape, turning "La Posada" into a hotel (Great Hotel Pichilemu, later Hotel Ross, or Ross Hotel), and building a casino, embankments, stone walls, a balcony facing the beach. Additionally, he built a park and a forest of more than 10 hectares. Agustín Ross turned Pichilemu into a summer resort town for the people from Santiago. Some of his buildings were named National Monuments.

Pichilemu is located 126 kilometres (78 mi) west of San Fernando, Chile and just east of the Pacific Ocean. It is around a three-hour drive to the Andes Mountains. It is also near the coastal mountain range.

Even though most of the forest areas around Pichilemu are covered in Pine and Eucalyptus trees, a native forest (now Municipal Forest) is still there It contains species such as Litres, Quillayes, Boldos, Espinos and Peumos.

Pichilemu, along with the communes of Placilla, Nancagua, Chépica, Santa Cruz, Pumanque, Palmilla, Peralillo, Navidad, Lolol, Litueche, La Estrella, Chile, Marchihue and Paredones, is part of the Electoral District N° 35 and belongs to the 9th Senatorial Constituency (O'Higgins) of the electoral division of Chile.

The current Mayor of Pichilemu is Roberto Córdova. The last popularly-elected mayor was Marcelo Cabrera, elected in 2008 with 42.08% of the vote, who served from May 2009 to August 2009 due to legal action. The municipal council selected Córdova as the new mayor on September 9, 2009, almost a year after the municipal elections. The current councilors are Aldo Polanco Contreras, Andrea Aranda Escudero, Viviana Parraguez Ulloa, Juan Cornejo Vargas and Marta Urzúa Púa. 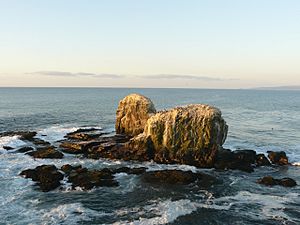 Surfing is one of the tourist attractions, particularly at Punta de Lobos. According to travel guide Fodor's,

[Pichilemu] is Chile's prime surf spot, and people come from around the world to test their skills. ... [Punta de Lobos] is widely considered the best surfing in South America year-round.

Pichilemu has many dark sand beaches. The water is cool year-round, though many tourists choose to swim during the summer months. Bodyboarding, surfing, windsurfing, and kitesurfing can be practiced.

The beach that is farthest north is San Antonio Beach or Main Beach (Spanish: Playa San Antonio or Playa Principal), which is found in front of the Ross Park. It is known for good surfing.

Las Terrazas Beach (Spanish: Playa Las Terrazas) is the busiest beach during the summer. Many surf schools, La Ola Perfecta and Lobos del Pacífico, are found near the beach, as is the Caleta de Pescadores (English: Fisherman Creek), where fisherman sell their fish. found at the south of the town and around the other side of the Puntilla, the Infiernillo Beach is found. It is used for fishing. At the south of Infiernillo, Playa Hermosa is found, which is great for walking and fishing.

Further south, 6 kilometres (3.7 mi) from Pichilemu, Punta de Lobos is found .It is an increasingly popular destination for tourists and specially for surfers. Several surf contests are held there, including an international big-wave contest during the Chilean fall. The size of waves varies throughout the year, but large swells in fall and winter can reach heights of up to 50 feet (15 metres). It is widely considered one of the best beaches for surfing worldwide.

All content from Kiddle encyclopedia articles (including the article images and facts) can be freely used under Attribution-ShareAlike license, unless stated otherwise. Cite this article:
Pichilemu Facts for Kids. Kiddle Encyclopedia.