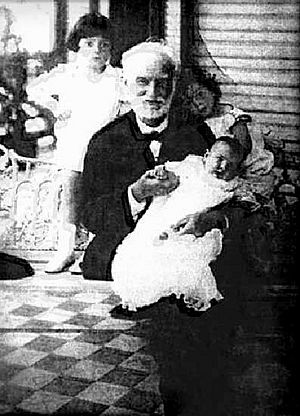 Agustín Ross circa 1915, in Pichilemu.

Ross studied in the Carlos Black and Simon Kerr School, in La Serena. He later went to Scotland, where he studied in the Queen Streat Institution, between 1856 and 1860. He participated in the trades of the bank of the Edwards family. He was a private agent in London of the Government Junta of Iquique in 1891. He was plenipotenciary minister in Great Britain in February 1892.

Ross went to Pichilemu circa 1890, and he bought some areas in the town. In San Fernando, in September 1885, he bought the property of Francisco Torrealba, a terrain that lasted at the Pichilemu beach. He first constructed the Ross Hotel with a European-style design, assigning Evaristo Merino as its administrator, meanwhile he started promoting Pichilemu in cities as Santiago de Chile. He later constructed the Ross Casino and the Ross Park. They used materials as: shards from Italy, Oregon pine from the United States, Portland cement. A Chilean chronicler quoted:

Ross was militant of the National Party of Chile. He was Senator of the Coquimbo Province between 1897 and 1903.

Ross died in October 26, 1926, in Viña del Mar. Later, his succession donated to the Municipality of Pichilemu their forest, terraces, park, perrons, among others, with the condition that they should be attended worthily.

All content from Kiddle encyclopedia articles (including the article images and facts) can be freely used under Attribution-ShareAlike license, unless stated otherwise. Cite this article:
Agustín Ross Facts for Kids. Kiddle Encyclopedia.