The city of Cuenca — in full, Santa Ana de los Cuatro Ríos de Cuenca — is the capital of the Azuay Province. It is widely regarded as the most European city in the country of Ecuador due to its 16th and 17th century era Spanish colonial architecture resembling cities and architecture throughout Spain. The city of Cuenca is located in the highlands of Ecuador at about 2,500 metres (8,200 feet) above sea level, with an urban population of approximately 400,000 rising to 700,000 inhabitants in the larger metropolitan area. The centre of the city is listed as a UNESCO World Heritage Trust site due to its many historical buildings.

According to studies and archeological discoveries, the origins of the first inhabitants go back to the year 8060 BC in the Cave of Chopsi. They were hunters, hunting everything the Páramo offered them, and nomads, following the animals and seasons. Their culture is represented by tools such as arrows and spears, which have been found throughout the Andean valley. The culture was most present about 5585 BC. 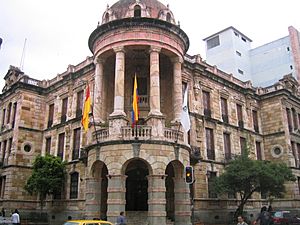 Most tourists visit the historic area, which is a UNESCO World Heritage Site, between the river Tomebamba and the street Gran Colombia to the north, General Torres to the west, and Hermano Miguel to the east. This area's compactness, grid-like layout, and numerous readily identifiable monuments make it easy to navigate. Outside this area the city can be confusing, as there are dozens of narrow colonial streets with similar buildings.

Major fiestas of Cuenca come at the time of the "Mass of Children" that is carried out the day of the Arrival of Kings (January 6 - Epiphany Day), or in the commemoration of the independence of the city (November 3), during which processions, cultural acts and dances are organized. The nearby Cañar plantation (in the county of the same name) features the biggest Inca ruins in Ecuador.

All content from Kiddle encyclopedia articles (including the article images and facts) can be freely used under Attribution-ShareAlike license, unless stated otherwise. Cite this article:
Cuenca, Ecuador Facts for Kids. Kiddle Encyclopedia.