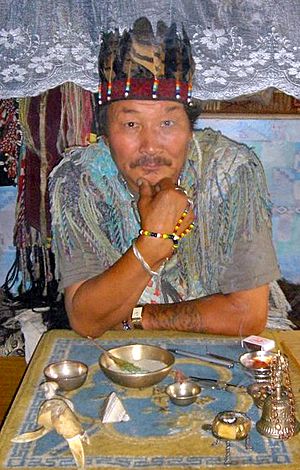 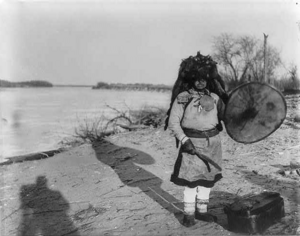 Shamanism is a practice where a practitioner reaches altered states of consciousness. Supposedly, the shaman perceives and interacts with a spirit world, and channels these energies into this world.

A shaman is a person regarded as having access to, and influence in, the world of good and bad spirits. They usually enter into a trance state during a ritual, and do divination and healing. To become a shaman, a person has to have had a near death experience (a "shamanic illness").

The name "shaman" comes from the Evenki people in Siberia.

Shamans play a central role in these movements, as they can be in both worlds, this one, and the world of spirits.

Shamanism is different from animism.

All content from Kiddle encyclopedia articles (including the article images and facts) can be freely used under Attribution-ShareAlike license, unless stated otherwise. Cite this article:
Shamanism Facts for Kids. Kiddle Encyclopedia.