Cusco is a city in southeastern Peru, near the Huatanay Valley (Sacred Valley) in the Andes mountain range. It is the capital of Cusco Region. The city has a population of about 300 000, triple the population it contained just 20 years ago. Alternate spellings include Qusqu (in old Quechua), Cusco, (after the Spanish arrived), and Qosqo current Quechua. Cusco is the preferred way to spell it in Spanish. 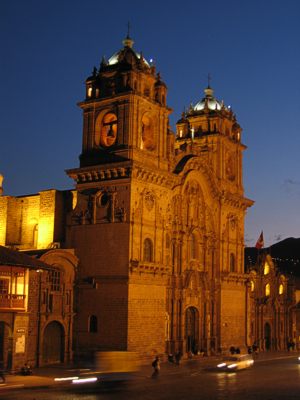 Cusco was the capital of Tahuantinsuyu (or Inca Empire). The city was planned to be shaped like a puma. The city had two areas: the hurin and hanan, which were further divided to each be part of two of the four provinces of the Inca Empire: Chinchasuyu (NW), Antisuyu (NE), Cuntisuyu (SW), and Collasuyu (SE).

According to Inca legend, the city was built by Sapa Inca Pachacuti, the man who transformed the Kingdom of Cusco from a sleepy city-state into the vast empire of Tahuantinsuyu. But archaeological evidence points to a slower, more organic growth of the city beginning before Pachacutieven though he did initiate growth in the city after defeating the Chancas as a monument to Incan glory. There was however a city plan, and two rivers were changed to flow around the city.

The first Spanish soldiers arrived in the city on November 15, 1533. Spanish conquistador, or conqueror, Francisco Pizarro, however, officially refounded Cusco on March 23, 1534, naming it the "Very noble and great city of Cusco". The many buildings constructed after the Spanish conquest have Spanish influence with a mix of Inca architecture. The Spanish made a new city on the foundations of the old Inca city, replacing Incan temples with churches and palaces for the Spanish. In the colony, the city of Cusco was very rich, thanks to the agriculture, cattle raising, mining and trade with Spain. Many churches and convents were built, and even a Cathedral, and the Universidad Nacional San Antonio Abad del Cusco. 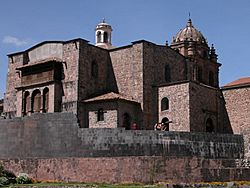 The major earthquake that hit Cusco in 1950 badly destroyed the Dominican Priory and Church of Santo Domingo, which were built on top of the impressive Koricancha (Temple of the Sun). The city's Inca architecture, however, survived the earthquake. Many of the old Inca walls were thought to have been lost after the earthquake, but the granite walls of the Koricancha were exposed, as well as many walls throughout the city. While some wanted to restore the buildings to their colonial splendor, some of Cusco citizens urged city officials to retain the exposed walls. Eventually they won out and now tourists from around the world enjoy looking at these ruins within the living city. The 1950 earthquake was the second time that the Dominican Priory had been destroyed, the first being in 1650 when another major earthquake struck Cusco.

Other nearby Inca sites are: Pachacuti's presumed winter home Machu Picchu, which can be reached by a lightly maintained Inca trail; the "fortress" at Ollantaytambo; and the "fortress" of Sacsayhuaman which is approximately two kilometers from Cusco. Other less visited ruins include Inca Wasi, the highest of all Inca sites at 3,980 m (13,134 feet), and Old Vilcabamba the capital of the Inca after the Spanish took over Cusco.

The surrounding area, in the Huatanay Valley, is strong in agriculture. There is corn, barley, quinoa, tea, and coffee grown.

All content from Kiddle encyclopedia articles (including the article images and facts) can be freely used under Attribution-ShareAlike license, unless stated otherwise. Cite this article:
Cusco Facts for Kids. Kiddle Encyclopedia.