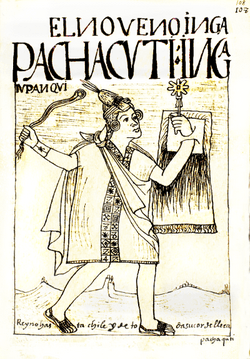 Pachacuti as drawn by Guaman Poma

Pachacuti Inca Yupanqui (or Pachacutec; Quechua: Pachakutiq, whose name means "He who remakes the world" was the ninth Sapa Inca (1438-1471/1472) of the Kingdom of Cuzco, which he transformed into an empire, Tawantinsuyu. He began the era of conquest that, within three generations, expanded the Inca dominion from the valley of Cuzco to nearly the whole of civilized South America. He was the fourth of the Hanan dynasty, and his wife's name is given as Mama Anawarkhi or Coya Anahurque. Their son was Tupac Inca Yupanqui. Pachacuti reorganized the new empire, the Tahuantinsuyu or "the united four provinces." Under his system, there were four apos that each controlled one of four provinces (suyu).

Machu Picchu is believed to date to the time of Pachacuti.

All content from Kiddle encyclopedia articles (including the article images and facts) can be freely used under Attribution-ShareAlike license, unless stated otherwise. Cite this article:
Pachacuti Facts for Kids. Kiddle Encyclopedia.