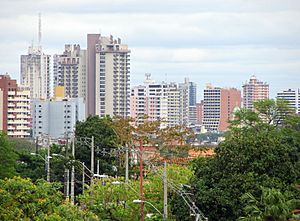 The Spanish word "asunción" means assumption in English. It refers to the Assumption of Mary; the full name means Our Lady, Holy Mary of the Assumption.

All content from Kiddle encyclopedia articles (including the article images and facts) can be freely used under Attribution-ShareAlike license, unless stated otherwise. Cite this article:
Asunción Facts for Kids. Kiddle Encyclopedia.