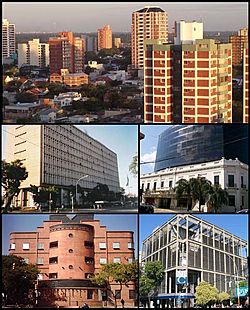 Resistencia, officially known as City of Resistencia, is an Argentinian city, capital and the most important city of the province of Chaco, in addition to its main social and economic center. It is also the head of a metropolitan area, known as Great Resistance, which in 2010 reached 385,726 people. Located to the southeast of the province, on the right bank of the Paraná River (shortly after receiving this to the Paraguay River), it is 18 km from the city of Corrientes, to which the General Belgrano Bridge links it. Between both they form a conurbano of near 800,000 people. It owns more than 600 sculptural works in the streets of the city, which earned him the title of National Capital of Sculptures. 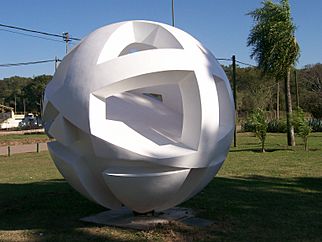 The sculpture in the Parque 2 de Febrero in Resistencia

All content from Kiddle encyclopedia articles (including the article images and facts) can be freely used under Attribution-ShareAlike license, unless stated otherwise. Cite this article:
Resistencia, Chaco Facts for Kids. Kiddle Encyclopedia.