Central (Spanish: Departamento Central) is a department in Paraguay. The capital is the city of Areguá. Its ISO 3166-2 code is PY-11.

The Central Department, known as “Comarca Asuncena”, was the most populated country region in old times.

The towns of this department had different origin. Domingo Martínez de Irala started the towns of Itá, Ypané and Areguá in 1538 and 1539. Villeta was founded by the governor Juan Gregorio Bazán de Pedraza in 1714. Other towns were founded around chapels.

The towns of Nueva Italia, Colonia Thompson and Villa Elisa were already established as agricultural settlements in the 19th century and the beginning of the 20th century. These were mainly settled by immigrants.

The Central department is in the central western part of the Oriental region. It is on the southern border of the Western region. It surrounds the capital, Asunción.

The Central department is relatively flat. It has only small hills. It has several rivers, as the Paraguay river, and streams flow through it. The Ypacaraí and Ypoá lakes are on the borders of the department.

The department is divided in 19 districts: 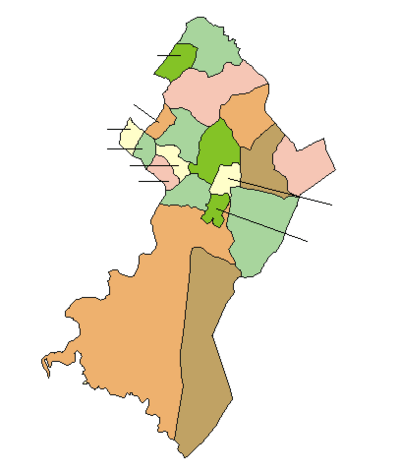 Industries include the processing of food, furniture, clothing, pharmaceutical production, metallurgic, plastic and ceramics. The city of Villeta has a large number of industries. Central is the second biggest economy of Paraguay.

The Central Department has many attractions for tourism. Among the most famous natural resources at an international level, is the Lago Ypacaraí. This lake is a very important natural attraction and the town of Areguá. The capital of the department is located on the banks of this lake

All content from Kiddle encyclopedia articles (including the article images and facts) can be freely used under Attribution-ShareAlike license, unless stated otherwise. Cite this article:
Central Department Facts for Kids. Kiddle Encyclopedia.