The Ñeembucú department (Spanish: Departamento de Ñeembucú) is a department of Paraguay. The capital is the city of Pilar. Its ISO 3166-2 code is PY-12.

The department is almost entirely rural, and there are some of the oldest and best-preserved Jesuit ruins, which are located near the town of Humaitá.

The department is divided in 16 districts: 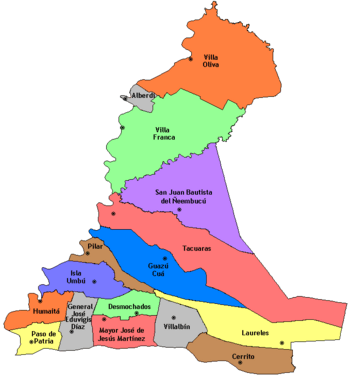 All content from Kiddle encyclopedia articles (including the article images and facts) can be freely used under Attribution-ShareAlike license, unless stated otherwise. Cite this article:
Ñeembucú Facts for Kids. Kiddle Encyclopedia.