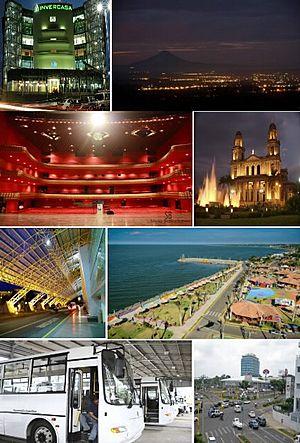 Managua has been the capital city of Nicaragua since 1855. There had been an Indian settlement there before the Spanish, but the modern city was founded as Leal Villa de Santiago de Managua in 1811. Before 1855, León and Granada were the capital cities. The word managua comes from the Nahuatl language mana-ahuac. It means near water. About 1.8 million people lived there in 2004. This makes it one of the biggest cities of Central America (after Guatemala City). The city is at the shore of Lake Managua. Many people who live in Managua are White or Mestizo. They all speak Spanish. There are also big communities of Catalonians, Germans, Italians and French. Many of the people belonging to those communities have lived in the city for many generations. Many people see Managua as one of the safest cities in America to live in.

The city has had two destructive earthquakes in the 20th century. Hurricane Mitch caused further destructions in 1998. Many old buildings were damaged or destroyed in these earthquakes, and new streets and monuments were built in their place. In general, addresses are rarely used to give directions. Instead, people usually use monuments to tell where a certain place is. The problem with that approach is that sometimes, the monuments themselves were destroyed. Therefore, foreigners often have problems finding their way around the city.

All content from Kiddle encyclopedia articles (including the article images and facts) can be freely used under Attribution-ShareAlike license, unless stated otherwise. Cite this article:
Managua Facts for Kids. Kiddle Encyclopedia.