Hurricane Mitch was the most powerful storm of the 1998 Atlantic hurricane season. Hurricane Mitch was one of the most powerful storm ever recorded in the Atlantic Ocean. Mitch was the second deadliest Atlantic hurricane because it killed 11,000-18,000 in Central America and Mexico, it is second only to the Great Hurricane of 1780. Mitch also caused over $5 billion in damage. Because the damage and deaths were very high, the name Mitch was retired and will never be used for a hurricane in the Atlantic Ocean again. It was in 1998 and hit Florida, Central America, and the Yucatán Peninsula. 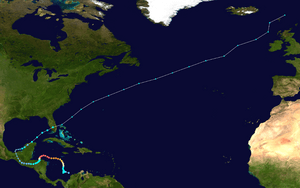 Mitch started weakening on October 27 and by October 29 Mitch was only a category 1. On October 29 Hurricane Mitch made landfall in Honduras, with the winds at 80 mph. Mitch quickly weakened into a tropical storm. Tropical Storm Mitch moved very slowly and almost froze over Honduras. Tropical Storm Mitch weakened into a tropical depression as it entered Guatemala.

After Tropical Storm Mitch crossed Florida it became extratropical and was no longer a tropical storm. The remains were last seen on November 9 north of Great Britain.

Many countries of the in Central American Region had record amounts of rainfall.

The worst affects from the hurricane were seen in Honduras, where Mitch caused 7,000 deaths and $3.8 billion in damage. In Honduras rainfall could have been up to 75 inches. Crops in Honduras were impacted very badly, Mitch destroyed, 58% of the corn output, 24% of sorghum, 14% of rice, and 6% of the bean crop. Mitch also destroyed 85% of banana, 60% of sugar cane, 29% of melons, 28% of African palms, and 18% of coffee. Just the crop damage from Hurricane Mitch in Honduras was at $900 million.

Also in Nicaragua rainfall may have been up to 50 inches. The rains stopped a volcano in Nicaragua, instead the volcano caused a mudslide. The mudslide covered an area 10 miles long and 5 miles wide. Hurricane Mitch left between 500,000 and 800,000 people homeless. Damaged in Nicaragua totaled to $1 billion and at least 3,800 were killed in Nicaragua.

In the U.S. only Florida was affected. In Florida, Mitch destroyed buildings in the Keys that were damaged by Hurricane Georges. Mitch killed 2 people and left $40 million in damage.

All content from Kiddle encyclopedia articles (including the article images and facts) can be freely used under Attribution-ShareAlike license, unless stated otherwise. Cite this article:
Hurricane Mitch Facts for Kids. Kiddle Encyclopedia.