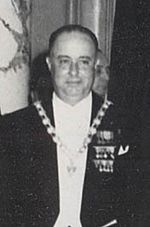 Anastasio Somoza García (1896-1956) was the President and dictator of Nicaragua from 1936 until his death in 1956. He ran one of the most corrupt governments in history. But because his administration was anti-communist he was supported by the United States. García was the son of a wealthy coffee planter. He was educated in Philadelphia where he met and married Salvadora Debayle Sacasa. She was also from a wealthy Nicaraguan family. He became very wealthy through investments in land, transport, real estate and manufacturing. After winning the 1936 Presidential Election, he took control of the National Guard. He placed family members in key positions of the government. He and his family controlled the Nationalist Liberal Party which controlled the legislature and Judiciary. This gave him absolute control of the country. On September 21, 1956 he was shot in León, Nicaragua by a poet. He died eight days later. His family continued to rule in Nicaragua for two more decades.

All content from Kiddle encyclopedia articles (including the article images and facts) can be freely used under Attribution-ShareAlike license, unless stated otherwise. Cite this article:
Anastasio Somoza García Facts for Kids. Kiddle Encyclopedia.