Allen is an affluent city in Collin County, Texas, a northern suburb of Dallas. As of the 2010 United States Census, the city had a total population of 84,246. 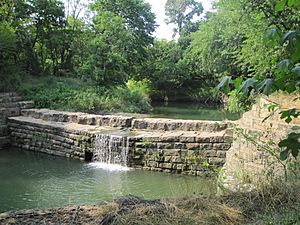 Allen Water Station was built for the railroad in 1874.

The Allen area was previously home to the Caddo, Comanche, and other indigenous peoples. The first immigrants from the United States and Europe arrived in the early 1840s. On February 22, 1878, a gang led by Sam Bass committed in Allen what is said to be Texas's first train robbery.

From 1908 through 1948, Allen was a stop along the Texas Traction Company's interurban line from Denison to Dallas. Allen was a small town of a few hundred residents when it was incorporated in 1953. Since this time, it has grown dramatically due to the construction of U.S. Route 75, the Dallas/Fort Worth International Airport, and the development of nearby Dallas and Plano.

According to the City of Allen, the city has a total area of 27.1 square miles (70 km2). None of the area is covered with water except the small ponds scattered throughout the city.

Allen is part of the Humid Subtropical region, with hot dry summers and mild cold and rainy winters.

There were 14,205 households out of which 55.5% had children under the age of 18 living with them, 74.6% were married couples living together, 7.4% had a female householder with no husband present, and 15.2% were non-families. 11.9% of all households were made up of individuals and 1.6% had someone living alone who was 65 years of age or older. The average household size was 3.07 and the average family size was 3.35.

All content from Kiddle encyclopedia articles (including the article images and facts) can be freely used under Attribution-ShareAlike license, unless stated otherwise. Cite this article:
Allen, Texas Facts for Kids. Kiddle Encyclopedia.