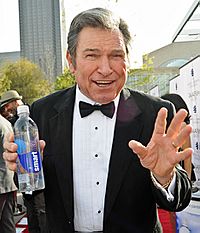 Burton Gilliam (born August 9, 1938) is an American actor. He was born in Dallas, Texas.

His television appearances include Alice, Charlie’s Angels, The A-Team,The Dukes Of Hazzard, The Fall Guy, and he appeared as a regular on Evening Shade.

Gilliam is married to Susan Gilliam. They have two children together. His granddaughter his gymnast Hollie Vise.

All content from Kiddle encyclopedia articles (including the article images and facts) can be freely used under Attribution-ShareAlike license, unless stated otherwise. Cite this article:
Burton Gilliam Facts for Kids. Kiddle Encyclopedia.